An Aether-Khemist is an invaluable addition to an airfleet. The armour of these specialists incorporates an array of high-tech tools, including quadbreather apparatus that allows them to sniff out aether-gold hidden within thick cloud banks. In addition to harvesting and assessing airborne resources, their atmospheric anatomisers can vacuum away a foe's breathable air or spray a cloud of lethal chemicals. Pressurised gouts of poison gas can be fired forwards in a deafening blast known as the "Roar of Grungni", or a shimmering golden cloud of chem-fog can be released with the pull of a lever, a metallic fug that boosts the power of nearby aetheric weapons.[1a]

An Aether-Khemist is armed with an Atmospheric Anatomiser that shoots clouds of Noxious Aether. They also carry Heavy Instruments with which they can bludgeon foes.[1b] 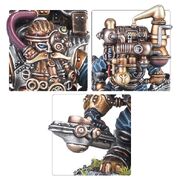 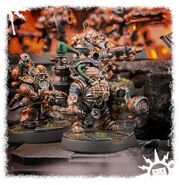