Whether directing a raid for souls upon a coastline or heading the defence of an undersea stronghold, the Akhelian Kings are the mightiest warriors of the Idoneth. They are the military leaders whose commands and personal heroics will determine the difference between victory or defeat.

Spurring his Deepmare mount, the Akhelian King rises high, rearing up to gather momentum and signal his warhost. For a heartbeat he hangs there, poised above his forces before it all begins. Then, with a gesture, the Akhelian King swoops, leading the charge that crashes down upon those who would oppose the Idoneth Deepkin. Between the King's flurry of well-aimed blows and the Deepmare's horn, slashing claws and fanged bite, foes before them are torn asunder.

To be given command of a phalanx a warrior must first prove himself. He must be swift and strong, able to best any of his comrades in single combat. Yet martial skill is not enough to make an aelf lord, for a King is first and foremost a leader. To repel an attacking sea monster, thwart a tide of ravenous voracudas or defeat an army upon a field of battle, an Akhelian King's mind must be as deft as his swordplay. He must make tactical decisions without hesitation, and possess the ability to inspire his troops, pressing any advantage or rallying his warriors should their courage falter.

While each enclave relies upon the strength of its Akhelian Kings, their judgement is equally vital, for every life lost in a raid is offset against any that are saved by the capturing of souls. Furthermore, Akhelian Kings must be skilled statesmen, for they sit alongside powerful Isharann as members of their enclave's ruling council.

It is traditional for a King to ride to war upon a Deepmare, a beast so rare it is reserved for only the most accomplished Akhelians.

A King bears a shield and fights with either a rhomphaia, an elegant polearm, or an astra trom, a greatsword. Some of their kind forsake a shield, the better to wield a weapon in each hand, using a falchion in addition to their main armament for a more aggressive attack style made famous by the Fuethan. 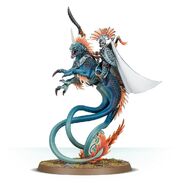 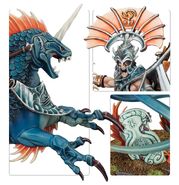 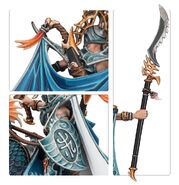 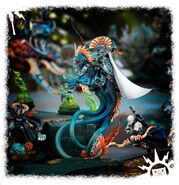 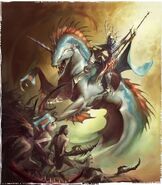