Alarielle on the gargantuan Wardroth Beetle

Goddess of Life and Nature

Alive
Alarielle, also called the Everqueen, is the goddess of life and nature of the Mortal Realms. A deity of incredible power, she was once a vital member of Sigmar's Pantheon of Order. After the Dark Gods successfully invaded Ghyran during the Age of Chaos she became withdrawn and cold.[1]

However, she has now returned to the forefront of the war against Chaos, and the ground shudders beneath the tread of her gargantuan Wardroth Beetle as Alarielle leads the sylvaneth charge. Wherever the goddess' wrathful gaze falls, her foes cower in terror, for there is no mercy in Alarielle's heart towards those who despoil her realm. By turns sorcerer and healer, warrior and protector, Alarielle is the singing heartwood of her favoured people, the Sylvaneth.[3]

Alarielle has existed in one guise or another for aeons. She is the nurturer of worlds, the mother of all life, who brings the endless potential of nature to glorious fruition. It is her children that raise the greatest life forms to maturity, that fashion beautiful worldscapes from the simplest seeds, and that sing the songs of paradise as the great cycles wind ever on.[1]

Some mortal seers say Alarielle was born from the humblest of beginnings, others that she has always existed, but in Ghyran, the first depictions of her bounty date back to the Age of Myth. Those who walk the living branch-tapestries of Oyrha first see the barbarian king Sigmar waking Alarielle from a long hibernation, winning her gratitude, and the two hurling back a tide of darkness. Later Alarielle is shown as a plant queen surrounded by a court of glowing tree-spirits, then as a wandering nymph distributing soulpods throughout the Mortal Realms. The last tableaus, wiry and barren, show a weeping goddess curled in her private kingdoms, sealed away in a paradise besieged on all sides by scenes of anarchy and destruction. In these times of strife, it is these latter images that ring truest of all. Most of the Jade Kingdoms have been stolen from Alarielle’s guardianship by the rapacious armies of the Dark Gods.[1]

And yet there is still hope for Ghyran. Alarielle’s mournful introspection has availed her little; even the roots she has put down into her last haven have proved brittle and dry. The seeds of her vengeance are sown, awaiting the light that will see them grow to deadly fruition once more. She is already working her life-giving magics to aid those who fight in the realm’s cause. With the forces of Order working as one, a new dawn may yet rise upon the Jade Kingdoms – an era that sees Chaos banished from her realm.[1]

Reborn from the land she loved in a soaring crescendo of hope, fury, loss and exhilaration, Alarielle the Everqueen is an ancient and powerful being. She is the goddess of life magic; where she treads, atop her immense wardroth beetle, new blooms scream forth in a riot of colour, strength and passion. She scatters soul amphorae across the Mortal Realms, each containing magical pollens that can coax new sylvaneth from the ground, or choke her enemies. The only match for the courage she instils in her allies is the hatred she feels for her foes – Alarielle the Everqueen burns with a fierce need for vengeance, and her enemies would do well to run.[2]

Alarielle’s reblooming gave her a perspective that her waning self had lacked. The goddess now saw that the war against Chaos could not be won simply by reclaiming Ghyran. The corruption of the Dark Gods must be purged utterly from all the Mortal Realms, lest they all be brought to ruin. It was this revelation that led Alarielle through the Ghyran Realmgate known as the Copper Falls – which connected to the Hellhaze Realmgate in Aqshy – and into battle atop Godskull Mesa. It also gave her a strength and determination that none of her previous incarnations had ever quite matched. Countless seasons of war had come and gone for Alarielle, but never before had they followed such a time of humbling, relentless defeat. Alarielle was angry in a way that only a deity can be, and she sought to venther frustrations and shame upon her enemies. Those who had brought Alarielle to her knees would be sorry that they had, for in doing so they had inadvertently raised her higher than ever, and this time she would show them no mercy.[3a]

When the Hellhaze Realmgate blazed to life atop Godskull Mesa, it caught the worshippers of Khorne there by surprise. Long had they used that smouldering portal to raid the wilds of Ghyran, but never had enemies come back through it to challenge them. That changed as Alarielle lead an unstoppable tide of sylvaneth out across the massive brass rune branded upon the skull-shaped mesa’s forehead.[3a]

At the Everqueen’s side marched clan upon clan of sylvaneth from many of the great glades. Before her, the osseous immensity of the Godskull Mesa stretched away, studded with towering brass fortifications and thundering volcanoes.[3a]

In this region of Aqshy, Khorne ruled. Millions of Bloodbound, Slaves to Darkness, and daemons of the Blood God infested the Dreadhold fortresses. Flames of pure wrath roared up from the mesa’s canyon maw, lighting the whole region with a hellish glow. Asthe sylvaneth spread across the mesa’s forehead, drums thundered and horns brayed from the fortress’ battlements. Bone gates rattled upwards on brass chains, and skull-studded walls screamed as the conquering hordes of Godskull Mesa poured out to meet the invaders. Charnel knights galloped alongside howling Blood Warriors and hissing daemons in numbers todarken the land, yet Alarielle was not dismayed. Instead, she smiled.[3a]

Upon the Everqueen’s orders, the Wargroves of the sylvaneth advanced. Entire armies of forest-spirits spread out upon either flank, making for the far slopes of the volcanoes that constituted the mesa’s eye sockets. Meanwhile, Alarielle led the main bulk of her host straight into battle, standing imperiously atop her wardroth beetle.The Noble Spirits of the Households flowed forwards, meeting the ragged Khornate battle-line with a thunderous crash. Enchanted blades swirled and hacked, cutting through brass armour and brimstone flesh. Treelords stamped and lashed, thundering their spiritsong commands even as hellblades hacked at their bark-clad forms. Skullcannons boomed out volleys of grisly ordnance. Showers of Kurnoth Hunters’ arrows pinned screaming Bloodreavers to the ground. Sap and gore swirled in a tide across the battlefield, and still the fighting raged. The worshippers of the Blood God caused hideous carnage amongst the sylvaneth, yet to their dawning shock, they realised that it was they, not their foes, who were being driven slowly back.[3a]

Alarielle was every inch the warrior goddess, blasting swathes of enemies from her path even as she healed the hurts of her children and brought them back to the battle time and again. In her wake, new realmroots burrowed through the bone soil, healing its corruption and causing Wyldwoods to burst up into the fiery light. Gradually, Life was blooming across the once-barren Godskull Mesa.[3b]

The surviving defenders of Godskull Mesa stood, backlit by the hungry fires of the Brimstone Maw. Around them, the sylvaneth stalked from the Wyldwoods to gather in a vast semicircle. At their heart stood Alarielle, her Sons of Durthu around her. To either side waited glades and clans gathered in vast numbers. Even Drycha Hamadreth waited upon one flank, pacing like a caged animal amongst her Outcasts, impatient for the butchery to begin. Where the worshippers of Khorne bellowed and roared, pounded drums and screamed praise to their god, the sylvaneth waited in absolute silence for the order to attack. Then, within their minds, the song of war boomed loud, and it was on this cue that they surged forwards as one.[3c]

Alarielle’s children charged the enemy line, sweeping down upon the followers of Chaos like a hurricane.The Everqueen soared at the head of the charge, a shimmering cloud of wardroth-spites flowing about her as she flew. Only at the very last moment did she drop from the skies, her monstrous steed coalescing into brutal solidity and crashing through the Khornate ranks like a battering ram.[3c]

Tides of writhing vines and ripping thorns dismembered skull-helmed warriors. Spirits of Durthu swept their glowing swords right and left, felling enemies like harvestmen at the reap. Elite bands of Kurnoth Hunter sloped through the battle, eliminating the enemy’s most powerful leaders with blade and bow. In a great rage, Drycha ripped her way through all that opposed her, until her spite-swarmed body dripped with the gore of her blood-worshipping foes.[3c]

Everywhere, brazen axes split barkflesh and spilled sap across the scorched ground. Bloodletters lopped the heads from Tree-Revenants while Skullgrinders whirled through the press, bludgeoning masses of Dryads to kindlewood with their chained anvils. At the battle’s heart, a pair of Bloodthirsters wrought absolute carnage upon the sylvaneth, their axes and whips sending splintered bodies flying through the air. Yet still the Chaos forces were driven ever back, until their rearmost warriors began to tumble, screaming, into the blazing gulf at their backs.[3c]

In one hand, Alarielle bears the deadly Spear of Kurnoth, while the other ends in the Talon of Dwindling, a dread weapon that chills the souls of any it wounds, withering spirits and atrophying bodies. She rides an unstoppable Wardroth Beetle, which causes untold ruin with its great antlers.[3]

With a gesture, Alarielle can summon forth healing pollens and soul seeds from the amphorae arrayed around her mount.[3]

With a wrathful glare from the Everqueen, the enemy's arms twist into boughs and their feet burrow down to form roots. She can also cast spells such as the Arcane Bolt and Mystic Shield.[3] 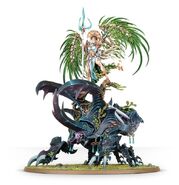 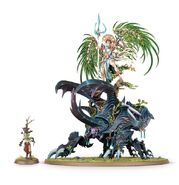 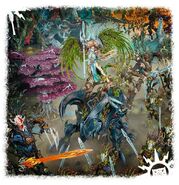 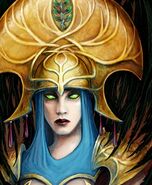 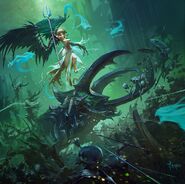 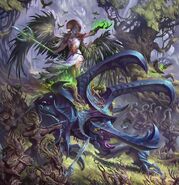 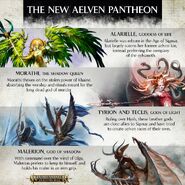