Bellowing primitive war cries from maws crammed with rotten, jagged teeth the size of boulders, the Aleguzzler Gargant tribes lumber to war accompanying Gloomspite Hordes. Aleguzzler Gargants are a type of Gargants, known both for their destructive impulses and for being permanently intoxicated on alcohol.

They have maws crammed with rotten, jagged teeth the size of boulders. Some have cloven feet.

They are drunken brutes, tromping around the realms destroying bits of the landscape or uprooting any trees they find suspicious. Stupid and quick to anger, anything that leaves them a slightly bit confused them will send them into a destructive rage. However, their memories are also very limited and as such they forget why they were destroying and just continue for the fun of it.

They will go into combat wearing improvised weapons, like tree-trunks, statues or even livestock. Not that they have any problem in using their enormous, horse-sized feet capable of leaving craters wherever they stomp. If these Gargants find any interesting objects or person they will hurl, crush, chomp it or, unfortunately, shove it down their filthy trousers or bags. They can stomp to death whole regiments or bash down dreadhold walls with their clubs.

Do their permanent drunkenness their feet are also unreliable, never able to walk in a straight line, often tripping over if they walk fast and crushing anybody or anything that happens to be on their path. They have special difficulty traversing ruins and towns, staggering through the streets, damaging roofs and stomping wagons. A falling Gargant is extremely dangerous, sending warriors scattering screaming in all directions, with those not quick enough to get out of the way are buried under tons of greasy hair and unwashed flesh. The fortunate ones are killed instantly, while the lesser fortunate spent their last moments suffocating under their huge sweaty armpits.

There are many tales and rumors from the Age of Myth that tell off the origins of the Aleguzzler Gargants in the Mortal Realms:

Its common for Greenskins and Ogors to take advantage of their size and trusting nature, by concocting the most stiff and despicable beverages in wagons-loads in order to lure these Gargants into helping their armies and smashing their foes.

The Gloomspite are often allied with these Gargants. When they go into battle they are often fighting raging hangovers, convincing them to fight for them with the promise of getting inebriated on barrels of crude fungus brew.

Their constant inebriation makes them as dangerous to their allies as their enemies. 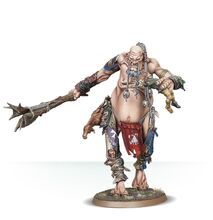 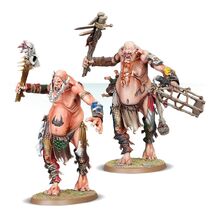 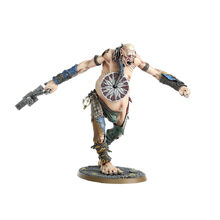 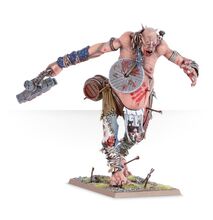 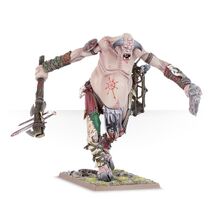