Strength calls to strength. Drawn in by the brutal might of the Ironjawz are countless Ardboy mobs. Among the strongest of the other Orruks, Ardboys flock to the brawls of the hulking Ironjawz, eager to prove themselves to a Megaboss with acts of bone-crunching violence.[1a]

To Orruks, the Ironjawz are like the fists of Gorkamorka pounding the face of the Mortal Realms. Ardboys hear this thundering tempo of violence and abandon their tribes to fight at the side of these mightiest of greenskins. Of all the other orruks, Ardboys are the only ones that are tolerated in the Ironjaw warclans, for they are the hardest boys about – next to the Ironjawz themselves.[1a]

Already great warriors themselves, the Ardboys seek to make themselves harder still, plastering themselves in armor and toting massive choppas in imitation of the Ironjawz. Despite their prodigious strength, enough to break the spine of a man one-handed, they cannot beat iron into shape with their hands like the Ironjawz. Instead, they forge it from salvaged iron, displaying surprising skill for their race, and giving their mobs distinctive appearance.[1a]

Ardboys form their own mobs and fists within the Ironjaw warclans. Strangely for Orruks, they believe in discipline and have banners and drums so they can fight in ranks or march about in lines. Blazoned across the Ardboys’ banners are images of horned and ironjawed Orruks, perhaps representing how the Ardboys see themselves, or to depict the Ironjawz they follow to war. They also give their fists fearsome names like the Facesmashas or the Gutrippas, to make them seem even harder. Most Ironjawz think Ardboys are a bit funny– after all, what’s marching to a drum got to do with smashing skulls – but admit that they know their stuff when it comes to war.[1a]

Eager to impress the Ironjawz, Ardboys fight all the harder when there is a Megaboss about. If there is a tough job to do, Ardboys mobs are often the first to charge forward to do it, scaling fortress walls, hunting down enemy lords or braving deadly terrain. Rivalry between Ardboys mobs is also common, and fists of Ardboys thunder into the fray, smashing and bashing everything in sight, each mob eager to prove they are the best.[1a]

Ardboys have their own bosses, and these bloody-minded Orruks love to show justhow ‘fibghty’ they are. Should a chance present itself, the boss will let out a deafening yell and lead their boys into the fray, telling the standard bearer to hold up their mob colors. These bosses embody not just the brashness of the Ardboys, but also their pride at getting to fight beside the awe-inspiring Ironjawz. Many times the brutal enthusiasm and the natural discipline of the Ardboys has turned the tide of war. In the siege of the Gorehaunt Bastion, it was Boss Krug and his Kneecracker Boys that felled its skull gates. His constant bellowing ensured his boys never faltered asthey dragged their battering ram up the castle’s causeway. During the battle for the Headsman’s Bridge in the Gallowsway, it was Boss Burug of the Bonehammas that held the narrow span over the Vargale Deeps. For days, Deathrattle legions hacked at him and his boys, until at last the undead ranks thinned and he ordered his Ardboys to stomp forward and vanquish their enemies.[1a] 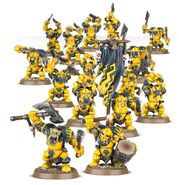