An Arkanaut Admiral is the leader of an airfleet of the Kharadron Overlords.[1]

An Arkanaut Admiral is the leader of an airfleet. An Admiral does not have a ship of his own, as each ship has a Captain at the wheel, but will nominate one craft as his flagship. It takes success and tremendous profit for a duardin to catapult themselves into the upper echelons of the airfleets, and individuals that have done so are battle-scarred veterans that have seen countless wars, boarding actions and aerial bombardments. Whether ordering tactical manoeuvres, directing concentrated firepower or coordinating land and air forces, an Arkanaut Admiral is first and foremost a leader.[1a]

Yet Admirals do not earn their rank by issuing commands alone, nor do they lead from the rear. Using their high share of profits an Admiral can outfit themselves with thick plates of Arkanaut armour, and back-mounted generators that fuel an aethermatically powered sskalfhammer so that it impacts with enough force to crack boulders. A sidearm is standard, typically a multi-barrelled volley pistol.[1a]

The Kharadron Code states that an Admiral is entitled to a greater share of any profits generated by an expedition – wealth they usually put towards the procurement of the finest arms and armour. In order to avoid being voted out, however, an Admiral must never fail to lead their fleet to success – a charge that ensures they are the most driven members of an intrepid race.[1b]

An Arkanaut Admiral is armed with a skalfhammer and a volley pistol.[1b] 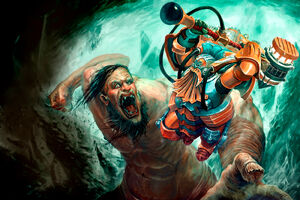