Astreia Solbright works with the foremost Sacrosanct Chamber of the Hammers of Sigmar – the Shimmersouls – to search for a cure to the flaw that is slowly eroding the souls of the Stormcast Eternals. On her quest, she has hunted countless ostensibly immortal creatures to unlock their secrets, having come into conflict with the vampires of Shyish on countless occasions. Originally a magus of light from Hysh, she now turns her mastery of magic and spirit-science to the aid of Azyr, bringing death to the deathless in search of liberation for her brethren.[1]

Astreia Solbright, known to those in her chamber as the Lady Arcane, is a woman of fierce intellect with a logical and incisive mind. The foremost Sacrosanct Chamber of the Hammers of Sigmar - the Shimmersouls - follows her vision as they search the realms for a cure to the flaw that slowly erodes their kindred. In slaying those creatures that are ostensibly immortal, and studying the process that revives them, the Shimmersouls learn more and more about the nature of eternity. Thus far, their quest to find and slay creatures in possession of eternal life has brought Astreia into conflict with one type of foe above all others - the blood-drinking vampires of Shyish.[2a]

Though laconic and circumspect, Astreia has an iron certainty to her that means those around her are usually swayed to her cause by just a few well-chosen words. Since her second reforging she has been surrounded by a corona of static electricity that causes her flaxen hair to stand out around her head. She wears that halo of energy like a crown - even when helmed for battle, she is limned with a glow that marks her out as a champion of surpassing power.[2a]

Her thoughtful and precise conduct has endeared her to the Celestial Dracoline Kazra - for the creature respects those who speak with actions rather than the loud, self-assured roars of a warrior. When on the hunt, the two can be surprisingly stealthy, an attribute that has proven useful indeed when prowling Shyish.[2a]

Solbright originally hails from the scintillating desert palaces of the Great Hysh Vista. There she was a Supplicant of the Great Lens, that prismatic edifice that stood atop the miles-high Pillar of Truths. That construction is so massive, so high-reaching, that Solbright spent her whole life up there, from her early days as a polisher-serf to her crowning achievement as a Lens Magus. When the Great Lens was used to burn the mutated drakes that assailed it during the height of the Age of Chaos, Solbright was pitched from her targeting throne into thin air. She never hit the ground. She had fought long and hard, and Sigmar had need of her skills.[2a]

Solbright was reforged in Azyr as a Lord-Arcanum, and given command of the Shimmersouls. She soon proved herself a pioneer as well as a leader, for she has long known the power of pure magic, and has mastered turning it into a weapon - it was Astreia that first bottled spirit energy to use as an explosive device. Her arcane talents are now even more impressive than when she was mortal. The scintillating magic she specialises in is the quintessence of Hyshian energy distilled into pure beams of exorcising force. Though she has left the dazzling science of her old homeland behind, and though she now owes more to Azyr than she does to Hysh, she can still summon blinding sun-rays capable of consuming even an ethereal creature.[2a]

Solbright and her kindred have slain or banished many immortal creatures - the Red Brides of van Kiarthus, the Liche of Fenn Dread, the Lord Wamphyr of Decrepita and the Unliving Monks of Dhostos Varne amongst them. Each has risen again, whether reappearing in a coffin, forming around a phylactery or canoptic jar, or reincarnating in the body of a newborn - and each has later been studied in turn. As yet, none have shown the kind of immortality Solbright believes vital to her cause. Every morning she gathers her hopes anew, for she knows that the fate of the Stormcast Eternals is at stake.[2a]

Ultimately, she hopes to one day find a creature that can not only return to full strength after each death, but become even stronger for it - for whatever arcane or spiritual process leads to that ability, she will deconstruct it in the laboratories of Sigmaron and attempt to emulate it in her chamberвЂ™s future reforgings. Thus far, to her growing disquiet, Solbright has heard of only one entity in all the realms that can claim to have returned from death stronger and more determined than before.[2a] 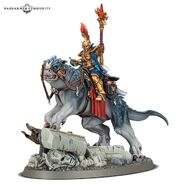 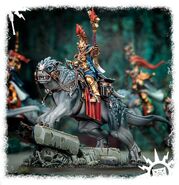 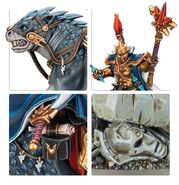