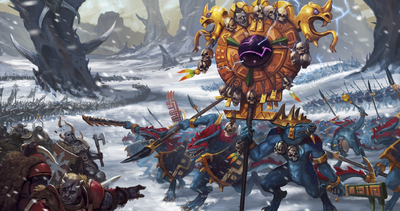 Crackling with cosmic energies, the sacred Astrolith is hefted into battle by a mighty Saurus warrior. The artefact’s discs rotate around the hewn sphere at its center until ancient symbols suddenly lock into alignment, unleashing the devastating power of the heavens upon the enemy.[1a]

When battle calls, the Seraphon may march to war under the light of an ancient relic known as an Astrolith. Glowing with celestial energy, the artefact’s graven discs turn to follow the movement of heavenly bodies, the strange symbols on its surface flickering as they move into conjunction with the mysterious globe at its heart.[1a]

With a single word of power the bearer can halt the Astrolith’s movement, a carefully devised combination of symbols calling down earth-searing energies. By tapping into this power, the Slann and his priests can reduce enemies to ash, invigorate the ranks of the Seraphon, or even summon more warriors to the battle. Those Seraphon who stand close to the Astrolith are also saturated with the power of Azyr, and fight all the harder because of the celestial energies flowing through them.[1a]

The Saurus that carries the Astrolith would rather die than let it fall from his unyielding grip. Whether the bearer is invigorated by the shimmering celestial energy that pours from the relic, or simply inspired by the honor of bearing it to war, he savages any foe who dares stand before him, ensuring that the Astrolith’s power flows ceaselessly.[1a]

Many are the battles in which an Astrolith has turned the tide in the Slann’s favor. During the Nightmare War it was only by the celestial light of the icon that the Seraphon were able to ascend the steps of the Midnight Bastion, the Astrolith sustaining them even as the necromantic stone sapped their strength. It is little wonder then that an army of Seraphon that marches with one of these relics at its fore is a force rumored to carry with them the blessing of the star gods.[1a]

Any Saurus Astrolith Bearer wields a Celestite Warpick and savages the enemy with its Fearsome Jaws. It carries an Astrolith, an ancient device that can increase the flow of celestial magic to the vicinity. They also know the Summon Astrolith Bearer spell, in addition to any other they know.[1b] 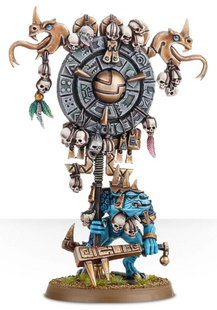 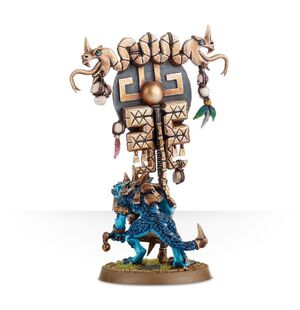