Auric Hearthguard defend the sacred forge-temples of the

Fyreslayers, their magmapikes hurling molten rock into their foes. Stoic and grim, they are a line of thick, rune-covered muscle that no enemy may cross – any that dare try end their days as blackened bone and smouldering flesh.[1a]

It is a great honour for a Fyreslayer to be chosen to serve in a fyrd of Auric Hearthguard. These elite custodians are charged with the protection of the magma-vault, where the lodge’s precious ur-gold is kept, and so they guard the spirit of Grimnir himself.[1a]

Hearthguard are entrusted to carry the lodge’s magmapikes, magical weapons crafted by the Zharrgrim in the heart of the forge-temple. From these eldritch staves the Hearthguard can hurl bolts of lava into their foes, gobbets of liquid rock that sear their way through flesh and bone even as they ignite hair and clothing. When their enemies draw close, the Hearthguard prove their stubbornness in hand-to-hand combat. Their ur-gold runes glow as the salamander heads of their magmapikes impale opponents on bladed horns, an ever-growing pile of torn and broken bodies accumulating before the Hearthguard as the Fyreslayers refuse to give ground.[1a]

Larger foes struck by magmapikes find the movement of their limbs slowly restricted as the burning rock cools and hardens upon their flesh. This technique has proven particularly effective against rampaging Magmadroths, as the creatures are largely unaffected by the blazing heat but are nonetheless overwhelmed by the crushing weight of molten rock.[1a]

The Hearthguard also serve as bodyguards for the Runemaster, and will often march to war beside the high priest. Many are the tales told by the Battlesmiths of Hearthguard standing resolute in the face of impossible odds, their beards smouldering from the heat of their constantly firing magmapikes, the ashen bones of the foe heaped at their feet.[1a]

A unit of Auric Hearthguard is armed with a Magmapike, a bladed polearm that can loose Molten Rockbolts at the enemy. Some units also carry Fyresteel Throwing Axes as a backup weapon.[1b] 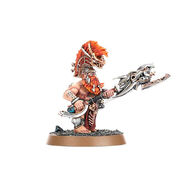 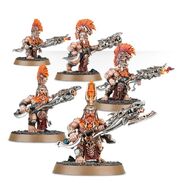 Auric Hearthguard is armed with a Magmapike.
Add a photo to this gallery

Retrieved from "https://ageofsigmar.fandom.com/wiki/Auric_Hearthguard?oldid=6938"
Community content is available under CC-BY-SA unless otherwise noted.