the lodge’s enemies. Wise in the ways of war, the Auric Runefather is the forge that tempers the white-hot fury of the Fyreslayers, hammering them into a berserk fighting force to hack and hew his foes apart.[1a]

The Auric Runefathers are the lords of the Fyreslayer lodges, each one a stern-faced patriarch and experienced war leader. In battle, they lead from the front of the Fyreslayer armies, directing their warriors toward their foes and cutting down powerful enemies with devastating axe swings. Such is the fire that burns within the soul of a Runefather that he can turn enemies to flight with but a single blazing stare.[1a]

Only the strongest Runesons will ascend to role of Runefather, often fighting in the shadow of their sire for decades to prove their worth. With the blessing of the Runemaster, a successor will be chosen not just for the fiery blood that flows in his veins, but also his spiritual connection to the essence of Grimnir. Such is the importance of the Runefather’s link to the god that it is tradition for him to take the title of Grimnir after his given name.[1a]

As befits their great rank, Runefathers carry many ancient objects of power sacred to the lodge, but none perhaps as blessed as the long-hafted latchkey grandaxe. More than just a weapon with which to lop off the heads of his foes, it is also the master key to the lodge’s great forge-temple vaults and its stores of precious ur-gold.[1a]

Runefathers are also among the few Fyreslayers with prowess enough to ride a Magmadroth to war. As the Fyreslayers are the descendents of Grimnir, so are the Magmadroths the children of Vulcatrix, and ever since the battle between duardin god and ur-salamander, a bond has existed between them. Heat pouring from their molten skin, Magmadroths are true creatures of fire, and only a Fyreslayer has the endurance to ride one into battle. From atop an ancient battle-throne on the back of his Magmadroth, the Runefather thunders into the fray, his flame-wreathed runes glowing with the power of Grimnir.[1a] 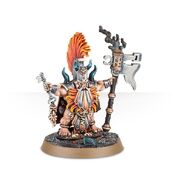 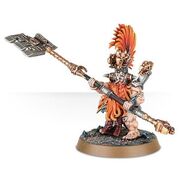 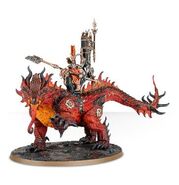