High priests of the forge-temple and heads of the Zharrgrim priesthood, the Auric Runemasters craft the ur-gold runes that give the Fyreslayers their power.

None can sense the spirit of Grimnir as keenly as the Runemasters, a gift they have cultivated in ritual and prayer upon the altar of war.[1]

A Runemaster’s power comes from their connection to the spirit of Grimnir, and it is through this that they can sense ur-gold, forge runes of power and even turn the boiling blood of the earth to their will. Those who witness a Runemaster at work, be it in the stone depths of a forge-temple or amid the roar of battle, swear that they see Grimnir in the priest’s eyes. As the Runemaster booms out ancient chants to their god, his beard seems to catch fire, though it does not burn. His skin shimmers with heat, as if it were metal fresh from the forge, embers flying from his hands as he casts runes or conjures bubbling geysers of lava from the ground.[1a]

Auric Runemasters are figures of ancient authority and wisdom among the Fyreslayers. They are the trusted counsellors of the Auric Runefathers and the spiritual guides of the lodges. Beneath the guttering torches of the forge-temples, they craft runes of power from ur-gold, shaping it into ancient symbols of Grimnir’s power. Only the Runemasters have the skill to make these true-forged runes of Grimnir, an art that has been perfected over generations of sweaty toil among the magmaholds of the lodges.[1a]

In times of war, the Runemasters lend their skills to the lodges upon the battlefields of the realms, seeking out enemies rich in ur-gold. Though all Fyreslayers can to some extent sense ur-gold, only the Runemasters have complete control over this gift, allowing them to find the precious metal even when it is miles away. Legends tell of Runemasters who could sense a single mote of ur-gold dust from leagues away, directing their warriors to its exact location. Fnordon Haldaster, famed Runemaster of the Sigyorn, was even said to be able to scent ur-gold located in different realms, and once warned his kin of a Chaos invasion when he perceived unfamiliar sources of ur-gold converging upon his lodge’s magmahold in Chamon.[1a]

Fire is sacred to Grimnir’s priesthood, and especially so to the Runemasters. When one of these high priests leaves the sweltering confines of his forge-temple, he will carry with him a brazier lit by its hearth fire. Crafted with representations of Grimnir’s stern visage, this hallowed torch contains a fragment of the forge’s soul. With its fire, the Runemaster can command other flames, including those that slumber deep beneath the ground. Slamming down the brazier’s fyresteel haft, its flames burn brighter and the battlefield cracks and shudders. Then, from below, oozing magma bubbles forth to burn away his foes in an unstoppable incendiary tide.[1a]

An Auric Runemaster is armed with a Runic Iron and Fyresteel Throwing Axes.[1b] 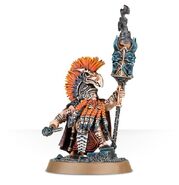