Flaming blood flows through the veins of the Auric Runesons,

making them bold and fearless in battle. They are the Runefather’s potential successors, and each is eager to prove his worth before his peers. Armed with devastating ancestral weapons, the Runesons seek out mighty foes to slay in the name of Grimnir.[1a]

Filled with reckless enthusiasm, the Runesons hurl themselves into the fray. Hot-headed, the Runesons are the heirs to their lodge, and should they live long enough, they might earn the right to carry the mantle of Runefather. However, this is far from certain. Runesons must prove worthy of their fathers with daring feats of arms, the heads of exotic beasts and trophies torn from the lifeless grip of Chaos lords.[1a]

Thus do Runesons lead from the front, where they seek out the most furious fighting and most powerful foes. It is not uncommon to see them at the spear-tip of a charge or as the first to breach a gate or wall. Competition between Runesons can be intense. Though it is rare for brother to turn upon brother, they will constantly try to outdo each other. Many are the times when rival Runesons have hacked their way through the press of battle, yelling out their tally of kills to each other even as they slay their enemies.[1a]

Runesons are also well known as lone hunters, riding out atop their Magmadroths, wyrmslayer javelins in hand, to bring back the head of a mighty beast. Places such as the abandoned Vosforge and the Obsidian Vaults are filled with the skulls of gargants and dragons, gathered by hundreds of generations of brave Runesons to impress their fathers.[1a]

The wild and competitive nature of Runesons means that a wise Runefather sires many such progeny throughout his time as patriarch. The greatest Runefathers, like Hursgar of the Greyfyrd, have had many sons over their long lives. Dozens have been lost to war and misadventure, but dozens more remain ready to take up Hursgar’s mantle when he dies. Yet only one of these will be chosen by the Runefather upon his death, with the blessing of the Runemaster. For the others, they are left with the choice of remaining to serve their brother, knowing they may never earn the right to lead the lodge, or setting out on their own. So it is that the death of the Runefather is often a time of fracturing within a lodge, and a time of new beginnings, as Runesons and their followers set out into the realms to found their own lodges.[1a] 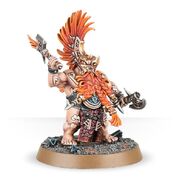 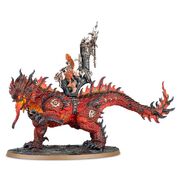