Alive
Aventis Firestrike was once a battlemage of the Agloraxi Empire that ruled the Great Parch, thrust into war by the coming of Khorne. Mastering pyroclastic sorceries in his search for revenge, his vengeful rampage was only ended after he has incinerated scores of the Khorne Bloodbound who defiled his home.[1]

Reforged as a Lord-Arcanum, Aventis has returned to his ancestral home in Aqshy as the Grand Magister of Hammerhal – he will not stand to see Chaos take another city, and has vowed not to rest until he has taken a traitor’s life for every citizen of the Great Parch that died during the notorious Red Century…[1]

Just as the lightning shatters the oak to leave a pillar of flame in its wake, Aventis Firestrike is not only the stormbolt, but its burning aftermath. His power over the magic of the realms comes from a glowing coal of anger lodged deep within his chest, which his many acolytes say is the source of his famously foul temper.[2a]

When the floating citadels of the Agloraxi crossed the Flamescar Plateau during the Age of Myth, that wizardly order came under attack from a host of daemons. In a matter of hours, the ancient magi destroyed the fiendish beings in a rain of fire. The ascendancy of these mages offended the Blood God, who swept his great reality-splitting blade across the skies of the Great Parch, all but destroying the Agloraxi.[2a]

Avantis is one of the few mages who can trace his lineage to that cataclysmic day. When he was a mortal known as Avante Fireson, he dedicated his life to fighting the Bloodbound worshippers of Khorne. He did so with plot and scheme as well as sword, for he knew their leaders were not only blood-crazed madmen but also conquerors with sound and cunning minds. Over the years he became known to them as the Fire Soul, a figure of hate and fear amongst the reavers of Khul's Ravage. Eventually, seeking revenge, they struck at the citadels of Avante's people. Dozens of towers were pulled down, and the families and serfs of his nation were hunted through the streets. After seeing pillars of smoke on the far horizon when returning from the war front, Avante hastened back to the city.[2a]

Upon finding the shattered remnants of his home, he took the Everburning Coal - a sphere of primordial realmstone he had studied at length over the years - from its filigree gold casket. Transmuting his body to a form of fire, he forced himself to consume it whole. Fighting down the raw agony inside him, he then took human form once more. He passed out, and awoke the next day surrounded by fire. Its flames did not harm him. He quickly learned to take the excruciating pain in his chest and channel it into a source of devastating magic, incinerating all those in his path to purge the remains of the arcane metropolis. Only when a group of frenzied headtakers dropped from their skull-mound on the roofs above to slam Avante into the cobbles was his rampage finally ended. But in his unstinting attack, Avante had caught the eye of Sigmar high above. In Azyr, he was remade as a Lord-Arcanum in recognition of his incredible magical talent, and took the name Aventis Firestrike.[2a]

Aventis was a passionate soul, but pure of heart, and he soon forged friendships with celestial beasts as well as his fellow Stormcast. When the Shyish necroquake cascaded across reality, he convinced his kindred spirit, the Tauralon Loithar, to go with him back to his homeland. Loithar agreed, albeit reluctantly, for the beast had recently sired a clutch of young. The two proved a powerful alliance, and since that day Aventis has won such acclaim that Sigmar has sworn him the Magister of Hammerhal. The old flames of anger in Firestrike's heart are magnified by the resentments of his steed; those with the temerity to wound the rider or his Tauralon only ignite their fury all the more. Aventis will not allow himself to rest until he has claimed a Chaos worshipper's life for every citizen of the Great Parch that died during the Red Century - a number counted in the millions.[2a]

Aventis armed with the Staff of Hammerhal.[2b] 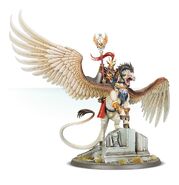 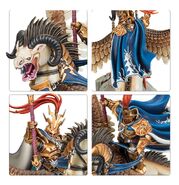 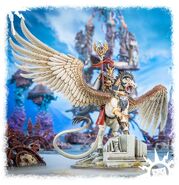