[1] Beneath the steely gaze of Grimnir, the Battlesmiths

recite the glorious deeds of their people. Only the greatest artisans have the honour of forging and carrying the lodge’s standards. These champions march into the fray, icons aloft, where they can witness the victories of their kin with their own eyes.[1]

Battlesmiths stand proudly at the fore of the Fyreslayers’ ranks, their booming voices carrying over the din of war. Held firm by arms grown strong in the forge, their icons of Grimnir gaze down upon the lodges, inspiring them to ever greater acts of heroism as they cleave a bloody path through the foe.[1a]

A Fyreslayer lodge is known by its deeds, and each oath sworn and battle won is a permanent credit to its name. The Battlesmith is the living memory of his lodge. He is able to recite its founding, its most glorious victories and the long line of Runefathers that have led it down the ages. However, despite this duty, he is far from a mere chronicler. Each Battlesmith is a skilled warrior, entrusted with protecting his sacred icon in combat. Once a battle is done, he will hammer runes of history into the back of his standard so that it might never be forgotten.[1a]

The right to carry an icon of Grimnir requires more than just talent with an axe, or even a close connection to the god. Battlesmiths are chosen by the Runefather from among his lodge’s greatest craftsmen, and it falls to the Battlesmith to forge his own icon. Only the duardin most gifted in the working of metal may create the image of Grimnir, for anything less than perfection in the representation of their god will not be tolerated.[1a]

The oldest Battlesmiths can recount hundreds of battles, and their droning remembrances can stretch for days or even weeks when the Runefather bids them orate the entire history of the lodge. Often, on long marches across the realms, this will be the duty of the Battlesmith – to regale his lodge with tales of the bravery of their ancestors, so that when the Fyreslayers finally reach their foe, they are filled with an inspired rage and are ready for war.[1a]

A Battlesmith is armed with an Ancestral Battle-axe and carries an Icon of Grimnir. Some Battlesmiths also carry a brace of Fyresteel Throwing Axes.[1b] 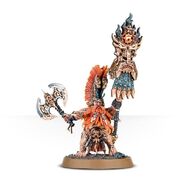