" The seasons have their order, the night comes after day, not so the horned marauder, the beastman of the bray. A creature without master, a killer without cause, a bringer of disaster, by blade and bloodied jaws. When come his hooves a'pounding, You'll hear the bestial call, and with your screams resounding, you'll run until you fall." 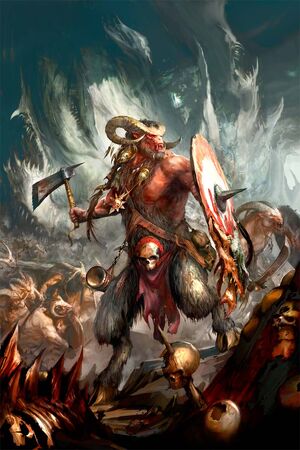 The haunted forests and wastelands of the Mortal Realms are home to savage creatures that live only to trample and despoil. Some call them the horned ones, others the true children of Chaos, but to mortal men they are known as Beastmen.

The Beasts of Chaos are warped visions of man and animal, consumed by hatred and rage. Their entire culture subsists on anarchy, living to fight anyone, including other Beasts. They are called the true children of Chaos, being the malformed manifestation of Chaos in the mortal realms.

Beasts live in the wild on the edge of any settlements - in the forests, jungles, and rocky outcroppings. Due to their primal connection with the Dark Gods, they can take many forms - some almost man-like but with savage strength, others resembling twisted chaos spawn with numerous eyes and hooves.

When the horns of battle call, the Greatfrays amass alongside their bull-headed brethren to fight alongside the armies of Chaos. The only reward they seek is the chance to wreak utter havoc upon everything in their path.

How the Beastmen came to exist in the Mortal Realms in unknown. By the beginning of the Age Of Myth, the Beastmen were already an ancient menace, centuries old. They thrived in the unformed time before the coming of Sigmar, terrorizing and preying upon the primitive bands of roving nomads and hut-dwelling tribes that populated the realms.

Folk tales of the savage beasts varied from place to place, but all shared the same horror. In ancient caves and upon cliff faces, primitive paintings showed the slaughters carried out by the Beastmen, and in ancient woods the branches of undying trees were mutated and twisted into effigies of gargantuan fanged bulls and rams wielding primitive stone weapons.

Within the realms, there are three major theories as to the origins and rise of the Beastmen: The Legend of the Alpha Progenitor, the Fable of the Warping Wilds, and the Corporeus Chaotica Postulate.

Legend of the Alpha Progenitor

In the tusk-glyphs that dot the Prowling Valleys of Ghur, the origins of the Beastmen are outlined as the distant descendants of one legendary creature: the Gorfather. According to the glyphs, the Gorfather was born the moment the wild heart of Ghur was formed. This monster's offspring formed the very first Greatfray, whose ferocity was so great that they spread across not only Ghur, but the entire Mortal Realms.

Many beastherds, primarily those among the Allherd, worship the Gorfather. During violent revelries held around Herdstones, Great Bray-Shamans tell tales of the Gorfather - how he hacked apart the Realm of Beasts and created the great Ghurish seas from bile and blood; how he tore open the first Realmgates by driving his horns deep into the flesh of the realms. The Beastmen that inhabit the Prowling Valleys erect massive Herdstones of living, braying rock, and to these effigies they offer their mutilated prey. After gorging on offal and warm flesh, the Herdstones begin to bulge, and from them are birthed entire new generations of Beastmen.

The eventual fate of the Gorfather is unknown, though it may have once been recorded in the tusk-glyphs. Vast sections of the glyphs have been completely destroyed over time, shattered and trampled into the mud.

Fable of the Warping Wilds

One common belief held across the Mortal Realms is that the Beastmen were once natural creatures that mutated into their hideous forms when Chaos began to bleed into the realms. Before the coming of Sigmar, the people of the realms lived in tribes guided by primitive superstition. Hungry for order, they looked to the changing of the seasons, the movement of celestial bodies and the unchanging cycles of life and death to find meaning. However, among these early peoples were those who saw the growing nodes of anarchic energy that had crept into their world. These individuals were stricken by prophetic nightmares, gifted with magical powers or cursed by deformity. Some were cast out from their communities, others isolated themselves by their own will, and others still remained among their kin and allowed their deviations to spread. Over time, these people grew ever wild, their bodies and minds twisting into animalistic forms and bestial instincts. Thus were the Beastmen born. From these first creatures were spawned generations of new beasts that spread across the realms.

Some seers in Azyr claim that the powers of Chaos continue to warp and mutate the denizens of the Mortal Realms. In their tomes, they record accounts of entire civilizations that fled into the wilderness during the Age of Chaos, only to return some months, years, or even decades later in the form of bestial herds to despoil their former homes.

Among the illuminated Hyshian texts collected in Sigmaron exist the works of ancient scholars who saw in the Beastmen the reversal of the order of all things. These academics believed the monstrous beings to be the heralds of a great and inescapable unraveling, insisting that creatures born naturally of the Mortal Realms are bound by order: for as rhinoxen produce more rhinoxen, so too do humans beget humans and duardin sire duardin. In the Beastmen, however, such separation of race is eradicated. Each member of their twisted kind is a grotesque mix of body parts, its flesh and bone melded into mockeries of natural forms. Adherents to this theory believe that such bestial fiends are not the progeny of Chaos, but its progenitor, created by those civilizations that do not segregate themselves as nature intended.

Only a scant few copies of these texts survived the Age of Chaos. The isolationist kingdoms in which they had been produced were known as the Refracted States, and distanced themselves from other nations within Sigmar's domain. They were among the first to fall when the forces of the Dark Gods surged into the Mortal Realms. With no allies to call upon for help, their cities were quickly shattered, their scholarly works shredded, and their people butchered. Those texts that did survive were collected into a single volume - the Corporius Chaotica. Passages from this work continue to be intoned by street preachers and doomsayers, and its tenets of segregation can be found scrawled on the walls of Sigmarite cities in which peoples of different lands gather.

In the Age of Sigmar

When Sigmar sent his Stormcast Eternals to the mortal realms to drive back the armies of Chaos, the Beastmen had ruled unopposed for five centuries. Towards these new warriors, the Beastmen felt nothing but hatred, seeing them as as beings of pure order whose shining ranks are ripe for desecration. Battles upon battles were lost, and the Beastmen were pushed back to the wild places of the realms as Sigmar's forces constructed massive cities and fortresses within their former hunting grounds.

Following the Syish Necroquake, known to the Beastmen as the Howl of the Dead Beast, many Greatfrays began to migrate towards Shyish itself. Only the Beastmen themselves know the purpose of this, but as more of their kind enter the realm of death, it is clear they are converging upon the Shyish Nadir. Terrified seers in Azyr see a possible strand of fate in which the Beastmen find the Great Black Pyramid of Nagash, and through their desecration transform it into an enormous Herdstone. Further along this prophetic path, the seers see nothing but roiling anarchy, wherein death itself has become dominion of the Beastmen.

Greatfrays are sort of sub-factions for the Beasts of Chaos.

Retrieved from "https://ageofsigmar.fandom.com/wiki/Beasts_of_Chaos?oldid=11675"
Community content is available under CC-BY-SA unless otherwise noted.