Skilled hunters, the Boarboys thunder across the land in search of monstrous prey, their primitive but wickedly sharp weapons piercing the hides of huge beasts and enemy soldiers alike. The Boarboys hit hard only to wheel away, leaving their foe reeling from the attack, before charging into combat once more.[2]

Sharing a bond that goes back to the Age of Myth, Bonesplitterz and war boars can often be found barrelling into the ranks of the foe at high speed, eager to be the first amongst them to spill blood. Specialising in hit-and-run attacks, they never linger where the enemy can strike back – speed is of the essence. Their boars are fed on the bones of the most powerful beasts the Bonesplitterz can slay, although of course there is rather a lot of bickering and competition amongst their orruk riders over which monsters’ bones make for the most brutal mounts.[1]

Units of Boarboys have at least five warriors, led by a Boss. They are armed with either chompas or boar stikkas, carry bone shields, and ride upon war boars that gore their foes with their sharp tusks. Some of them may be Boar Thumpers or carry boar totems.[2] 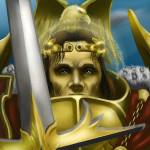