Start a Wiki
By far the most numerous andwidespread sylvaneth are the Forest Folk. These are the tribal bands of Dryads that make up the bulk of every clan, along with the Branchwraiths who act as their chieftains and spiritual guides.[1a]

During the Age of Myth, it was rare for the Forest Folk to be called upon to fight. The realms were wild and often dangerous, but they presented few hazards that the noble Households could not hold at bay. When the darkness of the Age of Chaos descended, everything changed. Those Forest Folk temperamentally or physically incapable of fighting back against the invaders were soon reduced to hacked and splintered corpsewood.[1a]

For the rest, life became a constant battle to hide, to flee, to live. Day by day, the joy and cheer was driven out of the Forest Folk, replaced by bitterness and hate for those who had despoiled their paradise. As the years ground by, the Forest Folk became adept at surviving on their own and at fighting back against their oppressors. Gentle hands transformed into jagged talons. Pale eyes burned with a hunger and bitterness that they had not known since the days before myth. War made killers of the Forest Folk whether they wished it or not, and these now insular and mistrustful creatures excel in stalking and ambushing their enemies. While they will never have the discipline and martial skill of the Noble Spirits, the Forest Folk have become warlike, frightening creatures and they can be especially deadly in large numbers or amidst the tangled boughs of the Wyldwoods.[1a][1b]

Branchwraiths lead all but the most wayward or unfortunate enclaves of Forest Folk. They are matriarchal authority figures and spiritual warrior chieftains who curb the wild instincts of the more fey and whimsical of their followers, striving constantly to ensure the survival and well-being of their Dryad kin.[1b]

Branchwraiths are powerful forest spirits, and many are gnarled by centuries of warfare and unflinching pragmatism. The Branchwraiths carry within their heartwood an echo of the Noble Spirits’ greatness and, though they do not bear lamentiri, they still comprehend the importance of their place to their people. It is the Branchwraiths who most clearly hear and project the spirit-song amongst the Forest Folk, and they who ensure that, when the song of war is sung once more, their Dryad bands join the muster.[1b]

Natural currents of life magic suffuse the Branchwraiths. They channel this surging energy into coiling blasts of thorned destruction to tear apart their enemies, or as a harmonic resonance to coordinate, protect and summon forth their Dryad followers.[1b]

A Branchwraith is a single model. She is armed with vicious Piercing Talons.[1c] 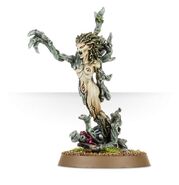 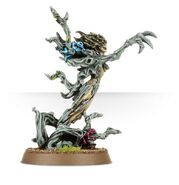 Retrieved from "https://ageofsigmar.fandom.com/wiki/Branchwraiths?oldid=7118"
Community content is available under CC-BY-SA unless otherwise noted.