Fearsome warrior matriarchs of the sylvaneth Households, the

Branchwyches lead their kin to battle with blasts of sorcery and hissing swings of their scythes. These same dread weapons are used when the battle is done to harvest the lamentiri from the fallen, thus preserving the memories and souls of the sylvaneth.[2]

Druidic practitioners of sacred life magic, protectors of the sylvaneth clans’ soulpod glades, Branchwyches are greatly respected for their abilities as commanders and sorcerous advisors. The sombre responsibility of harvesting their fallen comrades after battle is theirs, lending them infamously short tempers and stunning ferocity when roused to anger. Branchwyches are accompanied by Bittergrubs, creatures of voracious appetite whose powerful jaws can cut through flesh and bone with ease.[1]

To the Household spirits, duty and custom are all. Though the specifics vary from clan to clan – even from Household to Household – these warriors observe all manner of strange rites and rituals before, after and even during battle. Many are invisible exchanges of song or verse, but others, like the Walk of Blades or the Seven Cuts, are strange and unnerving to witness.[3a]

The spirits of a Household put greatstore in the defence of those places their glade considers sacred, and will slaughter invaders and trespassers with sudden ferocity. Those who harm a clan’s Forest Folk are treated the same, for the warriors of the Household are utterly dedicated to the defence of their Dryads.[3a]

Branchwyches are druidic figures, practitioners of life magic and protectors of their clans’ soulpod glades. The Branchwyches also bear the sombre responsibility of harvesting the fallen lamentiri of their Noble Spirits after a battle has ended. These they gather with swings of their scythes, bearing them back to the soulpod groves so that they may be planted anew in sacred soil. This is a vital part of the sylvaneth life cycle, and a duty that the Branchwyches will go to any lengths to see done.[3a][3b]

Branchwyches are greatly respected by their people for their abilities as martial commanders and sorcerous advisors. This is well, for many of these beings have infamously short tempers and are ferocious when roused to anger. Only spites seem immune to the Branchwyches’ire – the odd creatures can do no wrong in the Branchwyches’ eyes, and they flock to aid their matriarchal protectors when battle is joined. The most faithful of these companions are the bittergrubs, large caterpillar-like creatures that ride happily upon the Branchwyches’ shoulders, and savagely attack her foes if any come near enough. When a bittergrub has fed on enough of its victims’ flesh and blood, it metamorphoses, hardening over many days into an emerald cocoon before splitting open to disgorge a shimmering cloud of silver pollen that rejuvenates even the most befouled and corrupted ground.[3b]

A Branchwych wields a Greenwood Scythe, which she swings back and forth to reap the lives of her enemies. She is accompanied by a voracious Bittergrub whose mandibles can cut through flehs and bone with ease.[2][3c]

As a wizard, she can cast the Arcane Bolt and Mystic Shield spells, and also summon a swarm of malicious spites which spiral outwards to attack those who have displeased her.[2][3c] 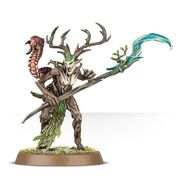