Brokk Grungsson is the Lord-Magnate of the Kharadron sky-port of Barak-Nar. Each time Brokk Grungsson returns to his sky-port, he does so with his airships’ holds so filled with treasure that they make some of the vaults in Azyrheim look like loose-change tins in comparison. No duardin alive reaps profit at such a ferocious rate as the Lord-Magnate of Barak-Nar, who takes the maxim ‘to the victor the spoils’ to new extremes on the battlefields of the Mortal Realms.[1]

Brokk Grungsson exemplifies the selfmade Kharadron Overlord privateer. He is rapacious in the hunt for aethergold, and daring in his explorations of the skybound wonders of Chamon. Brokk Grungsson is the only Admiral that has successfully led a fleet around the Spire, the fabled Horn of Chamon. He is hailed as the victor of the Battle of Stratis Skull, and when all the skyports joined forces to break the siege of Barak-Zon it was Brokk who was elected as the combined fleets’ High Admiral. He personally led the counterraids that ended the season of strife with Barak-Mhornar, and the greater daemon known as the Lord of Chrystal Flame was slain by his hand. The claiming of the aether-rich Cloud Ring of Dharz – the single richest haul ever brought back to Barak-Var – is another of Brokk’s long list of achievements.[1a]

Back when Brokk was a beardling, his father, Grung, had failed to make Musterpress during his time at the Arkanaut Academy and instead found work in the docks. As a result, Grung was always telling his son stories of a life of aeronautical adventure, the one he himself had yearned for. Fed upon all the tales of famous Captains, Brokk vowed to make his mark, aiming for nothing less than to rise to the rank of Grand Admiral of the Council.[1a]

During his own days at the Academy – and ever since – Brokk lived by a central tenet of the Code: ‘to the victor the spoils’. His daring was boundless, and as a young Arkanaut working through the ranks, Brokk’s deeds soon earned him medals, commendations and, best of all, more shares. After only a decade aboard the airfleets Brokk was named Captain, when his predecessor was lost during an attack by a rampaging harkraken.[1a]

Upon leading a fleet to drive off the greenskins that had overtaken the floating isle of Madralta, Barak-Nar named Brokk Grungsson Lord-Magnate. Short of being elevated to the Admirals Council, this is the highest honour that can be paid to an Arkanaut commander. It granted him the right to wear a zhaktopper – a symbol of great status amongst Arkanauts.[1a]

Despite bringing trawler-loads of riches into Barak-Nar, Brokk Grungsson has yet to achieve his goal of a seat on the Admirals Council. Although he has not yet matched the levels of profit generated by the current six members, he is closing quickly, and the fact that the present incumbents have amassed their wealth over several centuries whereas Brokk is still reckoned young by the lives of duardin has made his meteoric ascent even more spectacular. Yet leading airfleets is dangerous work, and many who have looked destined to claim a seat upon the sky-port’s ruling council have fallen – instead of winning glory, their names have been solemnly carved into the Rocks of Remembrance. Always one to lead from the front, however, Brokk’s natural aeronautical skills and aggressive nature have led him to many glories, and fleetmasters constantly hear of his exploits.[1a]

Putting his growing wealth to use, Brokk commissioned a magnificent custom-built dirigible suit from the Master Endrineer Durek Coghammer of Barak-Zilfin. This aether-powered exo-armour not only grants Brokk the power of flight, but also incorporates a number of advanced weapons, including a pair of moustache-mounted aetherblasters, a multi-barrelled gun he refers to as the Magnate’s Charter and a sizable cannon called Grungsson’s Boast. Brokk has perfected the art of landing amidst a melee, dropping the not-inconsiderable weight of his oneduardin flying suit right on top of his target whilst slashing around him with the whirring blade of his aethermatic saw. In battle, Brokk’s preferred strategy is to issue the fleet commands before leading his Skyriggers on bold manoeuvres to vanquish the greatest threat amongst the enemy’s number, be it commander, ship or monster.[1a]

Borne aloft in his magnificent custom-built dirigible suit, Grungsson deals death from afar with Grungsson’s Boast, the Magnate’s Charter and his moustache-mounted aetherblasters. When he is called upon to trade blows with his enemies, he does so with his aethermatic saw.[1b] 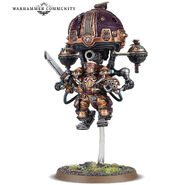