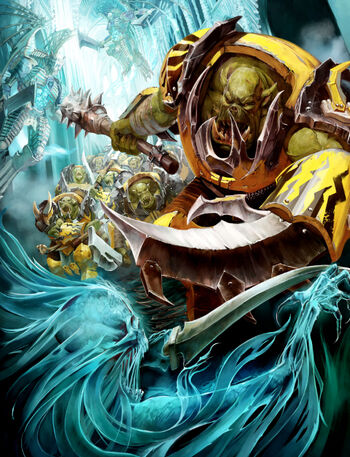 A thickset brow and heavy iron armour frame the angry stare of an Orruk Brute, their mind filled only with violence. Filling out the guts of most Ironjawz warclans, these hulking Orruks form a mighty greenskin sledgehammer ready to shatter enemy formations and fortresses to screams of ‘Waaagh!’.[1a]

Wrapped in iron armour crudely beaten over massive green muscles, Brutes are bigger and meaner than most other warriors of the realms. Brutes are the foot soldiers of the Ironjawz and the most numerous warriors to fight under the clenched fists of the Megabosses. What the Brutes can’t beat with violence, they beat with numbers, hacking down their opponents in seemingly endless waves of small-minded aggression. Even hardy creatures like Ogors, Troggoths or Gargants are not safe from the Orruks, and as the ancient Brute saying goes, ‘if smashing it ain’t working, get more boyz to smash it with’.[1a]

Ironjaw Brutes know they are the best Orruks because they get to do the most fighting. While the Megaboss might do all the pointing and choppa-waving, the Warchanters make some noise, Weirdnobs do all the green magic stuff, and Gore-gruntas think they are the best because they get to go faster, the Brutes are the ones that get things done. When a Megaboss wants to make sure something is smashed ‘good and proper’ he calls up his Brutefists. Brutes tend to like enemies that hide behind high walls, massive gates or in deep caves, because they don’t run away when the Ironjawz show up to give them akicking. There is also something small and spiteful in the mind of Brute that doesn’t like anything bigger than they are, be it a towering statue of Sigmar, a flaming Magmadroth or a particularly arrogant tree. In battle, which is to say all the time, Brutes seek out these ‘big’uns’. Inevitably, as one Brute spots something worth clobbering a dozen more will join in, not wanting to miss out on the chance to bring it down. More than one beast-riding lord has learned this the hard way, as mobs of Brutes will pile on such lofty warriors in a heaving mountain of green muscle and bad breath until their victim vanishes from sight, much to the horror of their brethren.[1a]

A unit of orruk Brutes has at least five warriors. Some units of Brutes are armed with two Brute Choppas, while others prefer to use double-handed Jagged Gore-hackas. In either case, 1 in every 5 warriors may instead be armed with a massive Gore-choppa.[1b]

The leader of this unit is a Brute Boss, armed with a Boss Choppa or a Boss Klaw and a Brute Smasha.[1b]