Castigators are crossbow-wielding warriors who fire crystalline bombs charged with Dracoth breath to obliterate both conventional and ethereal foes alike – like the Sequitors, they can charge their weapons with lightning when the need arises.[2]

Castigators are powerful ranged support troops, commonly employed by the Lord-Arcanums of the Sacrosanct Chambers against ethereal enemies that can kill with but a touch. These shock troops fire their deadly projectiles over the heads of their brothers-in-arms to detonate in blasts of cerulean force.[3a]

The Sacrosanct Chambers value firepower highly, for when battling the spirits of Shyish, destroying them before they can bring their razored claws to bear is often the best course of action. Against an ectoplasmic enemy, an arrow or iron bolt finds little purchase, often passing through the fiendish entityвЂ™s body as if it were no more than shadow. The Castigators, the ranged firepower specialists of the chamber, employ weapons far deadlier and more inventive than those used by other ranged fighters.[3a]

The thunderhead greatbow is a miracle of Azyrite science and ingenuity. In form it is something like a heavy crossbow, though it is far bulkier - and it needs to be, for it fires no mere bolt. The projectiles the greatbow hurls are more akin to maces, stout of shaft and broad of head. At their ends are flasks wrapped in bracing bands of metal, and it is the contents of these vessels that is the Castigator's true weapon. They are filled not with liquid, but with the storm-breath of the Stardrakes the lords of the Extremis Chambers ride to war.[3a]

The Castigators seek the aid of the Extremis Chambers' Stardrakes whenever they return to High Azyr. In a sombre dawn ritual, the great beasts exhale their stormcloud breath upon the thunderhead maces arranged carefully in a twelve-pointed star before them, just as their forefather breathed life onto the God-King whilst he still clung to the core of the world-that-was.[3a]

Once that tempestuous energy has filled each weapon, the Castigators attune their spirits to them, the better to wield their full potential. When empowered by the spirit energy of the wielder, the thunderhead greatbow launches these powerful projectiles with such force that the impact can punch through the armour of a Chaos warrior and crush the ribcage behind. As the thunderhead mace strikes the foe, the flask at its head bursts in a storm of crystal shards, and the energy within is released. When used against an ethereal enemy the true potency of these weapons becomes clear. Should they strike a wraith or a daemon, or even shatter on the ground beneath, they release a stormcloud of aetheric energy. The ensorcelled breath of the Stardrake, when unleashed in this manner, can discorporate a diabolic creature in an instant.[3a]

Castigators armed with a Thunderhead Greatbow and a Heavy Stock. The leader of this unit is a Castigator-Prime.[3b][4] 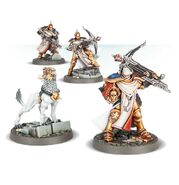 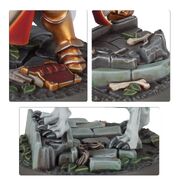 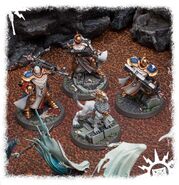 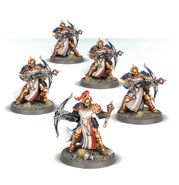 Retrieved from "https://ageofsigmar.fandom.com/wiki/Castigators?oldid=9360"
Community content is available under CC-BY-SA unless otherwise noted.