The Celestar Ballista is the first ever Stormcast Eternals war machine. The Sacrosanct Chamber isn’t just made up of mages and mystics, but also engineers – the Lord-Ordinator was just a hint of what’s to come…[3]

The Sacristan Engineers of the Sacrosanct Chambers hail from the Ordinatos Conclave – sometimes known as the Conclave of the Thunderbolt for the devastating impact it can have on a battle. These warrior-engineers command the chambers’ magical field artillery. When a Celestar Ballista is set up to defend a sacred site, approaching too close can mean an explosive death.[1a]

These war machines were first devised to defend the Anvil of the Apotheosis from attack. Installed by the foremost engineers of the conclave, they were set in the high archways that overlook Sigmar’s palaces and the sacred halls within. So cleverly were they designed that they could pivot around in a full circle with ease – ostensibly for a better field of fire should the Sigmarabulum ever be attacked, but also so they could be brought to bear against any aetheric apparition that broke free from the Anvil over the course of a traumatic reforging.[1a]

The Celestar Ballista is constructed in such a way that it can be broken down and carried by the two Sacristan Engineers that operate it, for the Stormcast Eternals are first and foremost a mobile force. In practice, it is more often utilised as a defence asset, coveted by Lord-Arcanums and Lord-Celestants alike. Wherever such a war machine is set, its versatility and impressive rate of fire allows it to dominate the battlefield, and when focused on a single target, its accuracy and power can deal a grievous blow to even agreater daemon of the Dark Gods.[1a]

Even without any enchantment, the sigmarite bolts flung from a Ballista’s firing apparatus could punch through a raised oaken drawbridge. Yet the Sacristan Engineers have their own method of using celestial magic. By taking each bolt to the top of the Sigmarabulum’s spires, they use their magical talents to coax coils of stray lightning down into the rune-inscribed projectiles. The risks inherent in this arcane process have led to more than one premature reforging, but this is considered a worthwhile sacrifice. Once a bolt has been fully charged in this manner, it becomes blisteringly hot, and it can induce star-given visions in those who touch it with their bare skin –not for nothing do the Sacristans wear heavy forge gauntlets as they go about their work. The better to keep this valuable asset safe, the bolt is stored in a special cartridge until it is time for its power to be unleashed. In the midst of battle, these bolts are then loaded into their ballistas and shot like streaks of blue-white energy at the foe. Should their strike be true, they will blast right through the target in a chain explosion of arcane force.[1a] 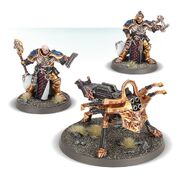 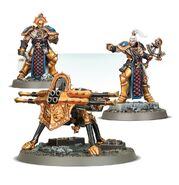 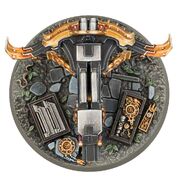 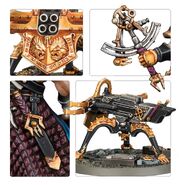 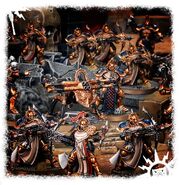