Immortal and vindictive, Nagash created Spirit Torments and Chainghasts to capture and watch over unrepentant offenders and - perhaps most importantly of all - to persecute them. Here are the gaolers of Shyish, the Keepers of the Keys and the fell guardians of the underworlds.[1a]

Encased within their iron harness, it is a Chainghast's fate to remain imprisoned, eternally in thrall to Spirit Torments. They carry emotionally burdened ghastflails - heavy bludgeoning weights that cast bolts of pure misery when swung.[1b]

Chained captives awaiting a terrible doom are wont to plead, beg and call out for divine aid. However, Nagash is a god without the slightest hint of mercy. To the Great Necromancer it matters not whether those iron-bound prisoners are guilty or innocent, or if their ends came swift or were cruelly prolonged. He cares only that their lives ended, for upon death all mortal souls are his due. However, those condemned that called out for godly intervention but did not include Nagash in their supplications are noted, and grim plans are made for the ultimate fate of those unfortunate souls.[1a]

Upon their deaths, the spirit-essence of those that die in captivity but do entreat upon the Lord of Undeath are made into Chainghasts. Infinitely spiteful, the Great Necromancer deems it fitting to keep such souls eternally imprisoned. Each of these wraith-spirits is encased within an armoured harness further bound with enchanted iron padlocks.[1a]

To burden Chainghasts further, Nagash has ordained that each spirit must be tethered to weights bound to heavy chains wrought of black-iron. This cursed metal is alloyed with dreadful emotions - the worst pangs of fear and hopelessness experienced by those callously enslaved. These 'ghastflails' are the weapons with which Chainghasts reap new souls, swinging them in great arcs to bludgeon a bloody path through the foe. When whirled with sufficient force the ghastflails build up a deadly charge of purest misery. Used like a massive sling, a ghastflail can launch this pent-up energy, hurling corrosive bolts of spirit force that eat straight through armour to burn a target's soul.[1a]

Chainghasts exist only to serve the Spirit Torment named their master. It is their duty to slay whom he commands, whether in close quarters battle or at range. Thus are the chain-bound spirits sent out to wreak havoc, battering mortal bodies to create a rich harvest of souls to be incarcerated into the arcane jails of the Spirit Torments.[1a]

Behind sealed iron masks the Chainghasts' minds retain dim memories of their mortal past. Like some dream half forgotten upon waking, each spirit maintains an inexplicable yearning to be free, an urge to escape from bondage, yet it is a desire upon which they can never act. Chainghasts are bound to automatically obey each and every command of their Spirit Torment. Trapped in a never-ending mind-loop, even their innermost thoughts are but another prison.[1a]

A unit of Chainghasts has any number of models, each armed with Ghastflails.[1b][2] 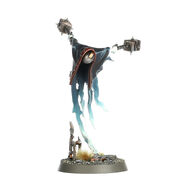 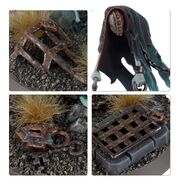 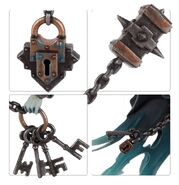 Retrieved from "https://ageofsigmar.fandom.com/wiki/Chainghasts?oldid=10234"
Community content is available under CC-BY-SA unless otherwise noted.