A horde of Chainrasps is a frightening force. A sword or axe might pass right through a Chainrasp without finding purchase, but the spiked clubs and rusted blades wielded by these evil beings can mangle flesh and shatter bone.[1c]

The most numerous of all the spirits that join Nighthaunt processions are the Chainrasp Hordes. These gheists are created from the spirits of the most vicious and irredeemable criminals to have lived in the Mortal Realms.[1a]

The form of a Chainrasp echoes the circumstances of their death. They who met their end in chains wear the same bonds in death. Those weighted down with heavy iron cannonballs or trammelled with thick manacles drag that same load with them. Yet no matter what they haul, Chainrasps seek to bludgeon, claw or sink a blade into any living creature they come across. While enemy weapons might pass harmlessly through the chained spectres, their own spiked clubs and rusty swords cleave flesh and break bone as easily as any physical equivalent.[1a]

The spectres of the Chainrasp Hordes are lesser spirits, held together in the afterlife only by Nagash's curse and by their own never-ending spite. That hatred leads to a madness so all-consuming that when the darksome beings gather in sufficient number, they leave behind a spiritual frostbite. Over time, this intense negative energy saps their victims' will to fight, making them easy prey when the Chainrasps move to attack.[1a]

Chainrasp champions are known as Dreadwardens - the wardens of unrepentant souls. The candles they bear are like beacons to the spirits under their charge, casting a dread light that the Chainrasps believe will lead to their freedom. In fact, it is this eerie glow that helps bind the impenitent to eternal servitude. The Chainrasps may have thought death would be an escape from their terrible imprisonment, but truly, it was only the beginning.[1b]

A Chainrasp Horde has any number of models, each armed with a Malignant Weapon. The leader of unit is a Dreadwarden.[1c][2] 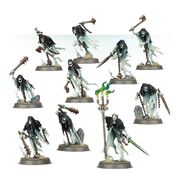