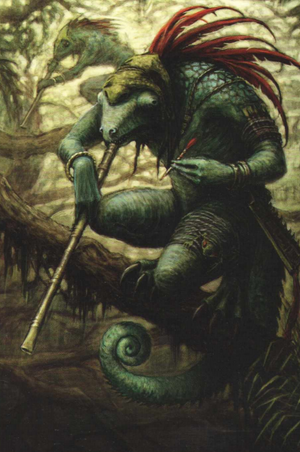 Some skinks, such as the Chameleon Skinks, possess curious abilities that allow them to fulfil specialized roles in battle. Superlative hunters and assassins, these Seraphon mimic their surroundings as they stalk their prey. Even keen-eyed enemies see only slowly-moving shadows as they search for their mysterious attackers. Too late they realize they are being watched, as dozens of glinting eyes appear in the darkness and the air is filled with the whispers of celestite blowpipes.[1a]

Chameleon Skinks exist within the shadows where the burning light of Azyr does not always reach. Here, they relentlessly hunt the followers of the Dark Gods as invisible instruments of the Slann’s will. The enchanted star-venom these skinks use to coat their darts is particularly lethal to the Daemons of Chaos, whose unnatural flesh bursts into celestial flames upon contact with the strange substance.[1a]

A unit of Chameleon Skinks are armed with Dart pipes but can fight in combat with their envenomed darts (covered in star-venom). They are also able to appear and disappear at will, making them excellent scouts and assassins.[1b] 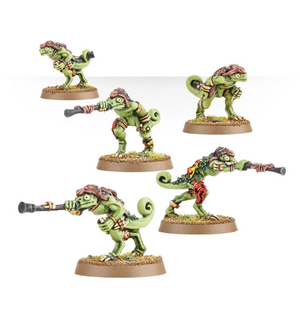