The Dracothian Guard are formed of four distinct types of retinue, composed into two echelons. Striking in successive waves, the Dracothian Guard hit swift and hard, for every immortal man and celestially empowered beast is selected, equipped, and trained for a specific battlefield role.[1a]

The fighting heart of the Extremis Chamber is composed of the Dracothian Guard – heavily armoured knights mounted atop thickly muscled reptilian beasts, who fulfil the role of the Stormcast Eternals’ shock cavalry. Their charge is a battering ram, a destructive wedge that can splinter apart enemy armies in a wave of claws, crackling weapons and celestial bolts.[1a]

Like the elder Stardrakes, the Dracoths too seek to restore Order. However, Dracoths are far less patient than their larger kin, being much more apt to charge into battle at the nearest opportunity. Such a temperament is fitting, for those Stormcasts who succeed in the Trials of Starwalking are also, invariably, the boldest and bravest of their kind. Together, rider and beast are eager to seek out the foe and exact bloody vengeance upon them.[1a]

The retinue and echelon to which a Dracoth or Stormcast Eternal is assigned to within the Dracothian Guard depends upon their skills and individual traits. The most aggressive of all are destined to be Fulminators – the tip of the spear and the first to lead the Lightning Echelon into combat. No matter the odds, these individuals seek the enemy as soon as possible. Only the best marksmen become Tempestors, and the Dracoths selected for those retinues are the most quick-witted. It is their task to manoeuvre into position while their rider aims and fires, every movement a balance between lining up the best angles of fire while maintaining proximity to the magical protection offered by the stormstrike glaives of the Fulminators. Of all the Dracothian Guard, it is these retinues that are most likely to fight in a fluid style –responding to targets of opportunity, or peeling off to counter threats to the Guard’s flanks. Such adaptability requires the most independent-minded Dracoths.[1a]

The first retinues of the Thunderwave echelon are the Concussors. Their riders and beasts alike are chosen for strength and brawling ability, for it is the savage shock of their attack that sets up the enemy for the ultimate strike. Merciless are those in the retinues that follow, for it is their duty to finish off the foe. All of them. The Stormcast Eternals and Dracoths that become Desolators are uncompromising, utterly committed to exacting total retribution. Theirs is the final judgement.[1b]

Once assigned to a retinue, a Dracothian Guard does not change role. However, each time they are Reforged, Stormcasts from the Paladin Conclaves must take the Trials of Starwalking. Some warriors that fail in their first venture succeed in later tests. Thus have some Paladins left their old retinues after taming a Dracoth, instead joining the Extremis Chamber.[1b] 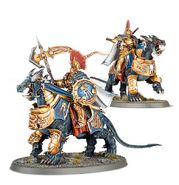 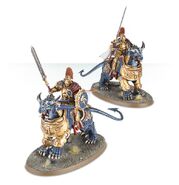 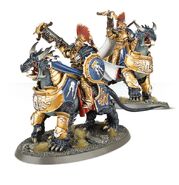 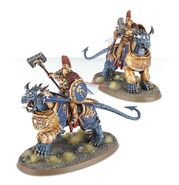 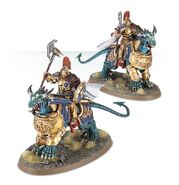