Start a Wiki
In life they were healers, yet in spirit form they are cursed with the uncontrollable urge to kill, their hands morphed into scything instruments of slaughter. Shrieking as they swoop in for the attack, Dreadscythe Harridans crave only carnage.[1b]

Dreadscythe Harridans were once healers and nurturing types, women devoted to easing suffering and prolonging life. It is, doubtlessly, these very offenses that drew the attention of Nagash. To deny the Great Necromancer his souls at their rightfully appointed time is to earn a cold ire that is unlike any other.[1a]

Nagash waits for no mortal, nor does he tolerate any interfering with his plans. It was imperative that he teach any such miscreants and interlopers a lesson. Truly, none would forestall death. So did Nagash prepare a special reward in the afterlife for those guilty of such crimes - the dreadful Harridan Curse. This baleful hex twisted the offending souls, reshaping them into something that was quite the opposite of what they once were.[1a]

Where there were once healing hands now grow bonescythes - horrible reaping instruments intended for murder. If their demeanour had been gentle and caring, the Dreadscythe Harridans – as they came to be called - are now raging killers. In life the sight of blood and injuries stirred in them compassion, but now it only incites greater fury. And lips that uttered gentle and soothing words to ease a patient's qualms now issue incomprehensible bloodthirsty shrieks that cause all but the bravest to quake with fear. Unable to enunciate, the Harridans only grow angrier. Those who led in life do so also in death - at the fore of Dreadscythe Harridan packs are the Slasher Crones, the most formidable killers of all their kind.[1a]

Perhaps the most disturbing consequence of the Harridan Curse is that the minds of the former healers are intact and aware. Most spectres lose all aspects of their mortal lives, but not so the Dreadscythe Harridans. While they retain their old memories they can no longer control their actions, so each is cognisant of and bears full witness to the atrocities that they commit, yet can do nothing to halt.[1a]

A unit of Dreadscythe Harridans has any number of models, each armed with Scythed Limbs.[1b] 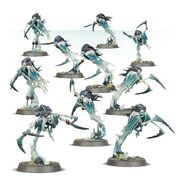 Dreadscythe Harridans miniatures.
Add a photo to this gallery

Retrieved from "https://ageofsigmar.fandom.com/wiki/Dreadscythe_Harridans?oldid=10251"
Community content is available under CC-BY-SA unless otherwise noted.