The sylvaneth Dryads are a howling, screaming manifestation of the forest’s wrath, falling upon those who defile their sacred glades with a malign violence that borders on glee. Dancing lithely between their opponents with a grace that belies their nature, they stab and choke foes with vicious talons, and few who invoke their wrath make it away alive.[1a]

The Dryads themselves are a wildforce of nature, flighty and impulsive creatures whose minds whirl with mercurial thoughts and emotions.They do not think in terms of grand strategy or military manoeuvre. Instead, they fight with unrestrained ferocity, spinning and lashing at the enemy like a storm. Their vicious talons are as sharp as any blade and are capable of punching straight through Chaos-wrought armour plates torend the flesh beneath. Dryads are surprisingly resilient for such willowy-looking beings, their tough, bark-like hide shrugging off blows that would normally fell an armoured man. As they fight, the Dryads sing keening dirges of loss and fury that tear at mortal senses like vicious thorns,confounding and distracting their prey.[1a]

There are some Noble Spirits, especially from amongst the more elitist rootclans, who look down upon the Dryads and see them as beings possessed of fleeting attention spans and petty concerns, although others believe such arrogance is unfair and unfounded. The Dryads fight hard in the ongoing war against the invaders of the realms, and though they rarely look far ahead, they care deeply about their cause and, if anything, the immediacy of their thoughts brings them closer to the urgency of their mother goddess.[1a]

A unit of Dryads has 5 or more members. They are armed with vicious Wracking Talons. The leader of this unit is a Branch Nymph.[1b] 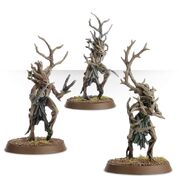 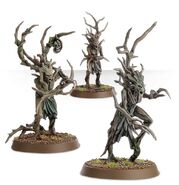