Drycha Hamadreth is a blood-soaked destroyer who keens with psychotic hatred as she tears through her enemies like a raging storm. The self-titled Regent of the Outcasts fights a never-ending crusade to eradicate those she sees as a threat to her race, leaving a trail of corpses both friend and foe in her wake as she rampages across the Mortal Realms.[2]

Only one twisted in mind and soul would seek the company of such horrors, yet Drycha Hamadreth has named herself their Regent. It is said that Drycha is a truly ancient spirit who fought in the wars at the end of the world-that-was. Many say she failed Alarielle at that time. Certainly, it was not until the darkest days of the Age of Chaos that the Everqueen relented and planted Drycha’s soulseed, releasing the Branchwraith from her millennial limbo. In truth, Alarielle feared the damage that Drycha’s firebrand madness might do and the horrors she might wreak. The Everqueen worried also that Drycha’s was a necessary darkness, and that by keeping her imprisoned, the mother had somehow weakened her children.[1][3a]

Alarielle planted her barbed seed in the hateful chasm known as the Hamadrithil. There dwelt an ancient and malicious sentience that Alarielle hoped would make Drycha strong.The Everqueen got her wish and more .What burst from the rift was no mere Branchwraith. Drycha Hamadreth walked in a body of twisted vines and gnarled thorn-root, the embodiment of the Hamadrithil’s malice given form. Ever torn between rage and depression, Drycha’s bitter soul drew deadly spites to infest her form. The flitter furies came to bask in the heat of Drycha’s rage, while the squirmlings suckled at her sorrow.[3a]

Drycha sang her own song, a discordant dirge of hatred for all those not of the sylvaneth, and she drew the Outcasts to her in great number, along with other disaffected clans besides. Drycha’s host was uncontrollable, a force of nature’s wrath that ripped through the allies of the sylvaneth as readily as their enemies. Unable to command her wayward daughter, but unwilling to destroy her, Alarielle was forced to name Drycha an Outcast herself. This seems only to have strengthened Drycha’s resolve, for she rules the other Outcasts as a twisted queen in the place of their estranged mother. Drycha herself remains an agent of anarchy and destruction, though she retains a grudging loyalty to her mother goddess. She draws no distinction between orruk and Stormcast, gor-kin and duardin, in her battles. Sometimes she fights at the head of Wargroves, other times alone or even at the side of those flesh-and-blood beings she hates, providing that to do so furthers her genocidal aims. Drycha seeks only the total dominion of the sylvaneth over the Mortal Realms, and she will fight however and wherever she feels she must until that end is achieved.[3a]

The Battle of Grolnok's Isle

Legend tells of the everbeast Fengarant, and of how that colossus found himself one day with Eagderethil – the father of bladewillows – stabbed like a thorn into his paw. Tribal myths across the plains tell one version of this tale or another, but all agree that, in his efforts to rid himself of Eagderethil, Fengarant trampled a mad path across the Thunderlands and beyond. Finally, the everbeast stamped upon the land so hard that the ground itself ruptured and a titanic valley was formed. Into the heart of this rift, Eagderethil was driven and finally freed of the monster’s foot. That expanse, known as Vastclaw Valley, remains to this day.[3b]

In the Age of Myth, the sylvaneth grew a wondrous place of power from Eagderethil and raised a mighty enclave there. A bladewillow shrine climbed to the sky and its twining roots carpeted the rocky isle that stood in the centre of the Sorrowmere, a nexus of life energy that brought Alarielle’s blessings to the lands for hundreds of miles around.[3b]

Then came the Age of Chaos, and the horrors of the Wars of Reaping. After long years of battle, the last sylvaneth defenders of Vastclaw Valley were burned alive within the toppled ruins of their beloved shrine. Where once the glittering seeds of the bladewillows had drifted down across the Thunderlands, now there fell only a rain of ash.[3b]

Vastclaw Valley changed hands several times in the centuries that followed. For a time, it belonged to the barbarian tribes of Lord Hakshadol. The Slaves to Darkness were butchered by the ogor tribes of Mawking Crackmarrow, whose ravenous followers were in turn ousted by the Ironjaw Megaboss Grolnok Gitstompa. The area was so contested because, though largely desolate, the island at the valley’s centre was broad enough to support a sizeable encampment, while the Sorrowmere made it highly defensible. Moreover, the valley itself remained bountiful, and the lingering life magic ensured that whatever army occupied the isle had plentiful food supplies.[3b]

Megaboss Grolnok had controlled Vastclaw Valley for only a short while by the time of Alarielle’s rebirth. Heand his warclan had been busy raising idols to Gorkamorka from the rubble of nearby Ghastenglor City, and he sent his mobs of hulking orruks rampaging far and wide across the Thunderlands. Grolnok ruled with an ironclad fist, smashing every challenge to his leadership, but what he did not realise was that the ruins, and his idols, were built atop Eagderethil’s dormant realmroots. The magic of these spiritpaths had, over the centuries, leaked out into the surrounding lake and created a new Realmgate – a Realmgate that the sylvaneth had discovered, and one that they now planned to use…[3c]

It did not take the Ironjawz long to realise they were under attack. Drycha and her followers made no pretence at stealth. Within moments, pounding drumbeats rang across the isle as the Warchanters hammered out the heartbeat of Gorkamorka. Bosses roared orders at their lads, kicking them into action. Gruntas snorted and gnashed as their riders leapt onto their backs, riding the bucking boars out of their make shift pens and off toward sthe sound of fighting. At the isle’s heart, Megaboss Grolnok heard the clangour of war and gave a slow, hungry grin. Rising from the metal throne of a now dead warlord, the massive greenskin punched his lurking Maw-krusha across the jaw, forcing the huge beast’s head down long enough to vault onto its back. Grolnok bellowed orders at the belligerent beast, kicking it until, with a croaking roar, the Maw-krusha launched itself into the air and beat its wings. The Megaboss sped across the isle towards the sound of the attack.[3d]

Only then did the true sylvaneth attack begin. On the isle’s opposite shore, Households and Forest Folk in the palehues of Harvestboon Glade began to rise from the lake. With the eyes of the Ironjawz fixed firmly on Drycha’s attack, the Wargrove of Clan Tethil strode ashore unopposed. At their head marched Ancient Lharenthol, lord of Clan Tethil and the broker of this uneasy alliance with Drycha. The Ancient knew in his heartwood that the Queen of the Outcasts was a dangerous ally, but her ferocious assault had done its job, drawing the attention of Grolnok and his Ironjawz. Now, ClanTethil advanced unopposed towards the barren heart of the once-beautiful isle.[3d]

The element of surprise did not last long. As they moved deeper into the isle’s scrub-tangled interior, the sylvaneth encountered a whole fist of Ardboys. These mobs had hung back from the initial fighting, clever enough to be suspicious of Drycha’s sudden assault. Mobs of Ardboys advanced in ragged ranks, eager for the fight but aware they were hugely outnumbered. Even as the Tree-Revenants and Branchwyches of the Tethil Households slammed into the Ardboys’ battleline, the greenskin drummers were pounding out a warning to the rest of the warclan.[3d]

Meanwhile, Drycha and her twisted daughters continued to wreak havoc.The Hamadreth was unstoppable, impaling Brutes and hurling Gore-gruntas through the air with every stab and swing. Meanwhile, the shuddersome terror evoked by the massed Outcasts was so great that even seasoned Ironjawz froze before them for crucial seconds, or even hurled down their weapons and ran. The Outcasts were hugely outnumbered, however, and with every passing minute, more of them were hacked down. When Grolnok’s Maw-krusha slammed into their midst, the sylvaneth were sent reeling. Drycha gave amighty shriek and lunged towards the massive beast, and for long moments, the Outcast Queen and the Megaboss duelled amidst the dead. Then came the thunder of the Ardboys’ drums.[3d]

Cursing, Grolnok realised he’d been tricked. Yelling at his Gore-gruntas to follow, the Megaboss struck Drycha a glancing blow that drove her back, then wheeled his steed and took off for the isle’s interior. The fast-moving Ironjawz reached the heart of the isle just in time to witness the last stand of the Ardboys. Clouds of spites whirled across the battlefield, tangling and biting as they went. Bands of Tree-Revenants flowed through the lines of battle, ensnaring their armoured foes, while Dryads and Branchwraiths whirled around the greenskins’ flanks and tore them apart. At the heart of the battle, Ancient Lharenthol stood with his roots driven deep into the soil and his arms thrown wide. Life-giving energies were pouring from the Treelord Ancient, rolling out further with every passing second.[3e]

Megaboss Grolnok ordered the charge, but even the belligerent Ironjaw could see it was too late. The healing magics were not just revitalising the sylvaneth, but were coaxing fresh and monstrous growth from the isle itself. Ardboys were dragged into the yawning ground by whipping roots, or torn apart by snaking thornvines. As the Goregruntas hurtled into battle, many were bloodily impaled upon fresh stands of bladewillows that burst up violently from below.[3e]

Kurnoth Hunters quickly closed upon the last of the Ironjawz and hacked them to bloody bits. Seeing this, and hearing Drycha’s blood-mad screams still ringing from the shore, Grolnok realised the fight was lost. He had not become a Megaboss by getting himself killed in pointless fights, and he wasn’t about to die without getting some payback for this dirty trick. Grolnok turned his Maw-krusha to the horizon, the beast winging clumsily away to fight another day. In its wake, Eagderethil began to rise anew.[3e]

A single-minded fighter, Drycha Hamadreth lays about herself with slashing talons and flays her enemies alive with the thorned slendervines that trail from her armoured form. Her unpredictable bouts of fury are as famous as her sudden melancholy. She does not fight alone, however, for she is the very embodiment of Hamadrithil's malice. Her form plays host to colonies of ravenous Flitterfuries (which rove out of Drycha in great clouds that darken the sky) and swarms of Squirmlings (that burst forth at her command to assail nearby foes).[2][3b]

Drycha knows how to cast magic, generally using the Arcane Bolt and Mystic Shield spells, but also one called Primal Terror - throwing back her head, Drycha gives voice to a deafening scream of anguish and pain, frightening her enemies to death.[2][3f] 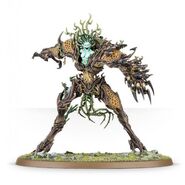 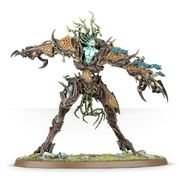 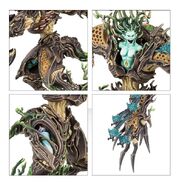 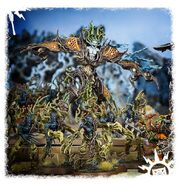 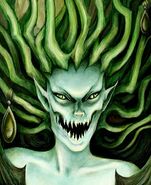 Retrieved from "https://ageofsigmar.fandom.com/wiki/Drycha_Hamadreth?oldid=7970"
Community content is available under CC-BY-SA unless otherwise noted.