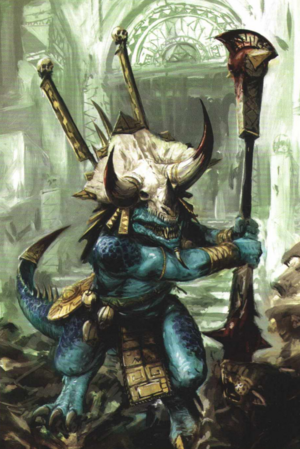 Saurus Eternity Wardens are the sworn protectors of the Slann and the leaders of the Saurus Guard. The Eternity Warden is a living shield that stands between his master and the foe, his massive star-stone weapon sweeping in devastating arcs to pulverize anything that threatens his charge.[1a]

Should an Eternity Warden fall a Slann can conjure his protector back to the Mortal Realms regardless of the manner of his demise, or the presence of barriers either mundane or magical. None but the Slann to whom he is pledged, however, may call upon a particular Eternity Warden.[1a]

Countless are the heroic acts of self-sacrifice performed by the Eternity Wardens, but a hallowed few are worthy of legend. Xoat'ar, Shield of the Azure City, choked a Lord of Change with his own broken body to save his master, while Atlor-ke the Unbowed stood sentinel for a hundred mortal lifetimes over the remains of his master Nohekal, until the Slann’s magic finally faded. The magical bond between an Eternity Warden and his master is so strong that it endures for as long as the Slann lives – a span which is often measured in ages of creation.[1a]

A Saurus Eternity is armed with a Star-stone Mace and tears into enemies with its Fearsome Jaws.[1b] 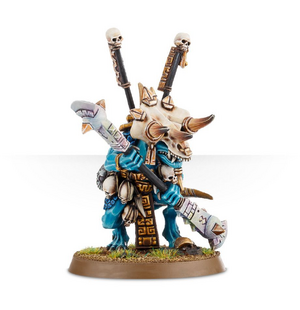