Evocators are warrior-mages – hybrids of Stormcast Eternals Paladins and Battle Wizard of the Collegiate Arcane. Armed with sword and stave, the Evocators can enhance the abilities of other warriors of the Sacrosanct Chamber with powerful spells.[3]

The Corpuscant Conclaves of the Sacrosanct Chambers are formed of mages capable of embodying the tempest’s energy. Rather than unleashing it in the manner of the Knight-Incantor, they absorb this energy into themselves. The eyes of an Evocator in full battle rage flash with sparks, and veins of lightning glow beneath his skin. That same energy plays over his tempest blade and stormstave as he advances, arcing outward to ground nearby. These bursts are deadly, and can blacken and scorch anyone in proximity if not consciously and carefully channelled. However, Evocators can also use this energy to empower their fellow Stormcasts with Azyrite energy.[1a]

Even should a rain of arrow shafts fall towards the Evocators, the projectiles are burned from the skies by the stormbolts that arc between their weapons. On through the thickest fire the Evocators stride, leaving tiny serpents of lightning in their footprints and scattering ash in the air. When they reach the foe, Evocators fight in a storm of interweaving blows that are all but impossible to avoid. When their tempest blades and stormstaves strike the foe, the captive cables of energy that link their weapons wind around the enemy, burning them to the bone before leaping back to crackle between their master’s weapons once more. Even an orruk horde will buckle under the intensity of a massed Evocators assault.[1a]

The most battle-hungry Evocators ride on massively built creatures known as Celestial Dracolines. Both saurian and feline in aspect, these creatures hail from the high peaks of Azyr. It is their habit to sharpen their claws upon mineral deposits rich in the realmstone known as celestium. In doing so, they charge themselves with the power of the storm, their bodies carrying a buildup of magic that can be released in a great scorching blast when the beasts pounce upon their prey. Combined with their heart-stopping roar, this makes the Dracolines fearsome creatures indeed. A charging Evocator and his mount are capable of felling a mournfang with such force its fellows will flee in primal panic.[1a]

A unit of Evocators has any number of models, each armed with a tempest blade and stormstave.[4] Any model can replace their weapons with a grandstave.[1c]

Pre-release image of the Evocators miniatures.[3] 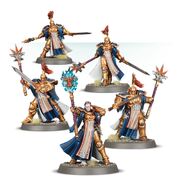 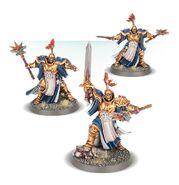 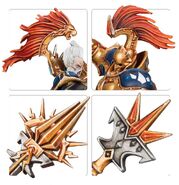 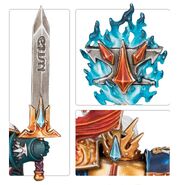 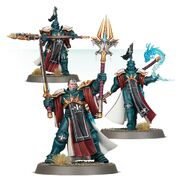 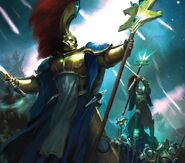