Alive
As a mortal, Gavriel Sureheart grew up as a slave in a Khornate fortress-arena, and led a rebellion that saw many of his masters cast down. He has since been reforged as a Lord-Celestant, taking his consummate combat skills to the forefront of Sigmar’s war.[1b]

Gavriel Sureheart was born to two slaves held in the Khornate citadel known as Ratspike. There, the citadel’s masters competed in an arena to slaughter as many of their victims as possible. As a child, Gavriel was known only as Grub, and his life was miserable. His main task was to fetch buckets full of blood from the troughs at the side of the arena, bring them to the walls of the citadel and pour them through the mouths of the castle’s gargoyles – for Ratspike had a reputation as a place where blood flowed in great measure. His back was no stranger to the lash, and he found little comfort in the vacant stares of his brethren, for they too had the spirit beaten out of them. Or so it seemed.[1a]

Upon his coming of age, Grub was given a mask and spear, and forced as fodder into the arena. But Grub’s overlords did not realise he had watched, learned and trained for ten years straight. He had used the sharpened handle of his mop in place of a spear, with his metal bucket as a cestus – as had those few fellow slaves who joined him in midnight training sessions. He proved a revelation in the arena, and the week of battle following his debut saw the gargoyles’ maws run thick with rivers of blood. A month of slaughter culminated with Grub’s spear in the throat of Ratspike’s king, and an armed revolt that saw Grub and his fellows escape the citadel. Yet they were run down that same night.[1a]

As Grub was bound, his neck feeling the bite of the axe, Sigmar snatched him from the wilderness in a blinding flash of lightning and bore him to Azyr. He was reforged as Gavriel, and proved an exceptional fighter in the Gladitorium trials – arguably he had trained for them all his life. Since that day he has swapped spear for sigmarite blade and buckler for broad shield. He has proved a capable Lord-Celestant, leading a brotherhood of Liberators to war against tyrants and dark kings wherever they are found. Few can match him in single combat, for the memories of his former life are still sharp, and he has the strength of one given a second chance for revenge.[1a]

Gavriel Sureheart is armed with a powerful Starbound Blade, and carries a Sigmarite Thundershield.[3] 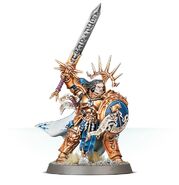 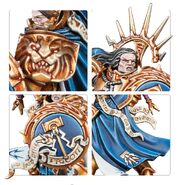 Retrieved from "https://ageofsigmar.fandom.com/wiki/Gavriel_Sureheart?oldid=9240"
Community content is available under CC-BY-SA unless otherwise noted.