A Glaivewraith Stalker is an unstoppable force. Its long blade always points at the beating heart of its intended victim. Though it drifts slowly toward its quarry, it is inevitable that the hunter’s glaive will one day pierce the chest of its prey.[1b]

Glaivewraith Stalkers prowl in packs, as they did in life. Where once they were mounted hunters that rode down their quarry for the thrill of the chase before the kill, they are now a strange amalgamation of horse and rider. Each of the crook-backed spectres is armed with a wickedly sharp glaive. Once levelled at a target, the Glaivewraith Stalker that bears the weapon never rests until their prey is slain. Always, no many how many twists or turns their journey might require, their blade is drawn directly to the heart of their victim, just as a compass needle is pulled always to its point of reference. The glaive even aims at targets out of sight or over distant horizons, for quarry that has been thus marked has no other destiny but to join the Glaivewraiths in death.[1a]

Glaivewraith Stalkers drift steadily after their prey, often advancing to the heartbeat thump of a drum made from human skin. Any thrill of the chase has been long replaced by a cold and unforgiving drive. For the hunted there can be no escape, but the same can be said for the hunter - for a Glaivewraith, there is no satisfaction in slaying their quarry, and a new target is immediately marked for the ritual to begin again.[1a]

A unit of Glaivewraith Stalkers has any number of models, each armed with a Hunter’s Glaive.[1b][2] 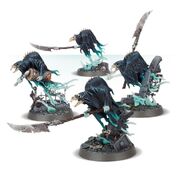 Glaivewraith Stalkers miniatures.
Add a photo to this gallery

Retrieved from "https://ageofsigmar.fandom.com/wiki/Glaivewraith_Stalkers?oldid=10246"
Community content is available under CC-BY-SA unless otherwise noted.