In a tidal wave of porcine flesh, gruntas charge across the battlefield, trampling their victims into the dust and greedily devouring anything they can get their tusks into. On their backs, wild-eyed Ironjawz scream out elated war cries. Together they are Gore-gruntas, the shock troops of the Ironjawz.[1a]

Gruntas are massive boar-like beasts with razor-sharp teeth, filthy hides and beady, hate-filled eyes. Notoriously foul-tempered, they are prized mounts for any Ironjawz Orruk with the mettle to ride them into battle. Mobs and fists of Gore-gruntas are the shock troops of the Ironjawz, thundering out ahead of any other Orruks to get at the foe first. Rusty choppas swung by slab muscled Orruks throw warriors into the air, while the gruntas tear through what’s left of the enemy line with their stomping hooves and piercing tusks. Even by the destructive standards of the Ironjawz, a Gore-grunta charge is horrific to behold, especially when entire units vanish under a roaring, grunting mass.[1a]

Gruntas will eat practically anything, from the mangled remains of enemies to unobservant Orruks, and even the foundations of buildings (they’re especially fond of the Khornate ones made out of skulls). Gruntas also eat copious amounts of iron, usually as are sult of consuming the more edible things it is attached to, like people. This undigested metal is then harvested by the Orruks for weapons and armor and is called pig-iron.[1a]

An Orruk never really tames a grunta, because the creatures are far too belligerent ever to accept a rider without a fight. When Ironjaw warclans pass through an area where gruntas are known to roam – easily identifiable by the devastation wrought on the local wildlife and landscape, not to mention their copious leavings – some Ironjawz go out on a grunt hunt. Once they have cornered the beasts, Orruks hammer bits of iron onto the gruntas, driving the rivets in with their bare fists. This shows they belong to the Ironjawz. It also has the joint benefit of armoring the gruntas and, more importantly, slowing the beasts down just enough to make them possible to ride.[1a]

In countless battles throughout the ages, the Gore-gruntas have been responsible for the most spectacular Ironjaw victories, and the destruction of some of the greatest armies ever to stand against the greenskins.[1b]

Cunning bosses have come up with their own vaunted Gore-grunta strategies, like the Tusks of Gork, the Hoof Puncher or the fearsome Snorting Snout Spear. Grunta riders argue endlessly over which tactics are the best for smashing up the enemy, while other Orruks point out, at their peril, that they are all basically the same: get a bunch of Gore-gruntas together and charge them into the enemy as fast as they will go.[1b]

A Gore-grunta Boss is particularly belligerent even for an Ironjaw. His beast is usually covered in more iron than his boys’. This layer of grunta armor is usually made of the toughest or shiniest bits the boss can find, more to prove he is in charge than for any kind of protection. His grunta will also be the meanest one about, and all the other gruntas are careful not to look it in the eye lest it bite their faces off. Gore-grunta Bosses make a name for themselves in a warclan fairly quickly, because they are usually the first to give the enemy a good kicking. Amongst the Ironsunz, the hardest Gore-grunta Boss (or so he claims) is Gutgrak Ironteef. The crazed Orruk virtually lives on his grunta’s back, content to let it carry him from one scrap to another. He even eats like a grunta, catching and gobbling down the bits of gristle, meat and bone thrown up by his mount’s feeding frenzies, all the while grinning madly like Gork himself.[1a]

Gore-gruntas units are formed by at least three warriors, led by a boss. Some grunta riders are armed with pig-iron choppas, while others carry jagged gore-hackas.[1c]

From time to time, huge grunta migrations thunder across the realms, stirred up by Gorkamorka’s war-making, or so the Ironjawz believe. At these auspicious times, warclans send out their bravest or most reckless boys to create a war-sty. Digging out yawning pits, smashing together massive scrap walls or felling entire forests, the orruks build sprawling corrals and drive the grunta herds into them. These seething seas of bristly, lice-ridden hide are then whipped into a frenzy by the Ironjawz. Big rocks, bits of iron and the odd screaming grot are all hurled into the mass until the gruntas are good and angry. The Orruks themselves then leap into the mess, each scrambling and grabbing until they manage to mount a grunta.[1b]

When the corral gate is finally flung open, what is unleashed is a stampede of snorting violence that tears across the landscape, crashing through anything in its path. Sometimes, grunta herds are of such magnitude that there are enough beasts to carry an entire warclan across the Mortal Realms from one battle to the next.[1b] 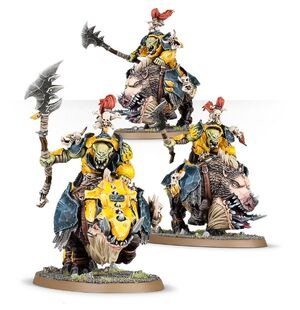