Arch plotters and schemers in life, Grimghast Reapers are cursed in their undeath to kill indiscriminately. Those foolish enough to stand before a Grimghast Reaper usually end their lives hacked apart into bleeding chunks of meat.[1b]

In life, those who were to become Grimghast Reapers were careful and meticulous killers. They planned and plotted, worrying over every facet of the illicit deeds that they committed. All took great pains to see that no blood would fall upon their hands, for the deaths were brought about through whispered lies, poison or the employment of mercenaries. In death, Nagash has seen fit to punish such souls with everlasting bloodshed in the most frenzied and obvious manner possible. Blindfolded with strips of sanctified shrouds, Grimghast Reapers cannot see, not even with the witch-sight granted other spirit forms. This is part of their curse to keep them in a state of eternal rage.[1a]

Armed with slasher scythes, Grimghast Reapers are indiscriminate killers. They never cease in their long sweeping strokes that mercilessly cut down the enemy a rank at a time, and they never tire. Like horrible clockwork figures, they endlessly repeat their deadly shearing strikes. The grim spectres move quickly, hovering down to attack, but doing so with jarring motions that are antithetical to the graceful movements of the living. They seem to start and stop, travelling in convulsive bursts, yet they are fast for all that.[1a]

The champions of the Grimghast Reapers are known as Extollers of Shyish. Once spiritual leaders that spoke out in life against Nagash, they are now harbingers of death. Each bears a massive bell - a death knell - whose sombre toll strikes to honour the Supreme Master of Death. The sound rings especially true when the great bell batters the flesh of the living - the resulting resonance is so disturbing that it can shake a mortal's soul loose from their physical form.[1a] 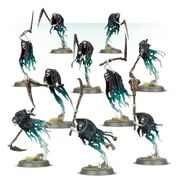