Grimwrath Berzerkers are much more than Fyreslayers

possessed of exceptional strength and skill; they are the fury of Grimnir made manifest. None are as filled with the spirit of their god as these champions of battle, and all who stand before their burning axes soon meet the same bloody fate.[1]

Carving winding trails of flaming destruction through the enemy’s ranks like the fire-wyrms of old, Grimwrath Berzerkers wreak absolute ruin with their massive fyrestorm greataxes. Roaring war cries to Grimnir, they plunge deep into the ranks of the foe, for they are at their most furious when utterly outnumbered. Blades spark off their rune-covered skin, leaving only shallow furrows in their toughened flesh. Surrounded by ghostly, blazing auras, the Fyreslayers snarl in rage as blood streams unnoticed from their wounds, their eyes smouldering with the barely contained power of Grimnir.[1a]

Even a single ur-gold rune grants great magical strength, and so powerful are the fragments of Grimnir that only the mightiest warriors can bear more than a few. The Grimwrath Berzerkers have proven able to harness dozens. Even the Runemasters do not know for sure why this is the case, and the only way to determine if a Fyreslayer has the soul of a Grimwrath is for him to take the Test of Wrath. With the blessing of the Runemaster, runes will be hammered into the Fyreslayer’s body until his flesh either rejects their molten touch or the spirit of Grimnir awakens. It is a dangerous process that many do not survive; some are driven mad with gold-rage, while others are burnt to cinders in pillars of fire.[1a]

The Grimwrath Berzerkers are venerated as paragons of Grimnir. However, the same fury that makes them legendary fighters makes them ill-suited to lead. By ancient tradition, they stand apart from both Runefather and Runemaster, neither heirs to the lodge or to the Zharrgrim priesthood, much like the wandering Doomseekers. When not in battle, a Grimwrath is constantly training, for Grimnir brooks no respite from martial endeavour.[1a]

A Grimwrath Berzerker is armed with a Fyrestorm Greataxe. Some also carry Fyresteel Throwing Axes.[1b] 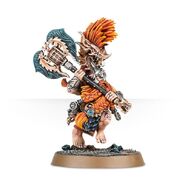 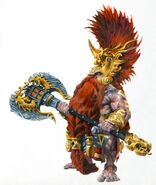 Retrieved from "https://ageofsigmar.fandom.com/wiki/Grimwrath_Berzerkers?oldid=7481"
Community content is available under CC-BY-SA unless otherwise noted.