Fast and armed with a powerful main gun, the Grundstok Gunhauler is the deadly escort-class ship of the Kharadron Overlords' airfleets. These small, manoeuvrable craft are tasked with ensuring the safety of the airfleets’ larger ships, and it is a role they perform well, swarming in defence before peeling off to launch deadly attack runs.[3]

Grundstok Gunhaulers streak through the air, weaving between the larger Arkanaut craft. They are two-duardin vessels tasked with eliminating threats before they have a chance to endanger the ships under their care. In this the Grundstok Gunhaulers are ideal, for they are fast and agile craft, being little more than a gun platform carried aloft by a buoyancy endrin. Their speed and agility, and their ability to deliver firepower at a moment’s notice, make them invaluable additions to every prospector’s arsenal.[1a]

Small and agile, it features as a main armament a choice of sky cannon or drill cannon. Two duardin crew the Gunhauler: a pilot who stands at a large rack of arcane instruments, and a gunner who controls the aethershot carbine, fragmentation charges, detonation drills and belaying valves used to gently dissuade enemies from getting too close to the main fleet.[1a]

Despite its relatively diminutive size, the Grundstok Gunhauler has everything it needs to fly: ailerons and rudders to steer it, duardin faceplates on the prow and dirigible, and a host of pipes, valves and propellors that give it a truly industrial feel. There’s even an anchor swaying gently from the side.[1a]

A Grundstok Gunhauler is a single model. It is armed with a sky cannon or a drill cannon, as well as an aethershot carbine and racks of grudgesettler bombs, fragmentation charges and detonation drills. The crew of the Grundstok Gunhauler operate these deadly armaments, but will defend their vessel with belaying valves if need be.[1b] 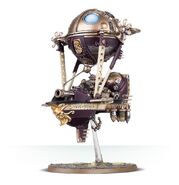 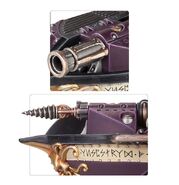 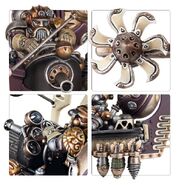 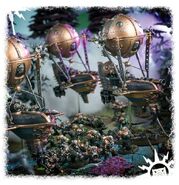 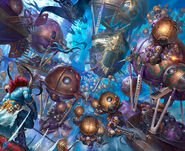 Retrieved from "https://ageofsigmar.fandom.com/wiki/Grundstok_Gunhauler?oldid=9255"
Community content is available under CC-BY-SA unless otherwise noted.