Grundstok Thunderers are professional warriors, well drilled and trained to fire quickly with great accuracy. They are equipped with a broad arsenal of deadly aethermatic weapons, and it is their task to lay down a blistering hail of firepower to protect the Kharadron Overlords’ airfleets and the goods that they carry.[3]

The Grundstok Thunderers are militarised formations employed by the fleet to help defend it. The endless training and drilling conducted by the Grundstok Academies results in high standards of discipline and marksmanship in their graduates – upon commands from their officer, the Grundcaptain, they march, wheel and ready their aim with awe-inspiring speed and precision. Firing in near-perfect synchronicity, a line of Grundstok Thunderers temporarily disappears among eye-searing flashes and weapon reports as they unleash a storm of munitions that can halt even the most well-armoured foes in their tracks.[1a]

The Grundstok Company spares no expense in outfitting their warriors, and each is equipped with the finest arms and armour available to the Kharadron Overlords. Aethershot rifles shoot a hypercharged blast of aether that condenses mid-flight into a solid round, and combine a high rate of fire with impressive stopping power. The aethercannon operates on a similar principle, but is a heftier model that fires rounds of a much larger calibre.The fumigator, meanwhile, belches forth a cloud of noxious fumes, while the decksweeper fires a wide spray of aether-grain shot, ideal for repelling enemy boarding actions. The Grundstok mortar lobs a high-arcing shell that terminates in a blinding explosion of lethal aether-energies.[1a]

Grundstok Thunderer formations often include an Honour Bearer, a warrior carrying an ancestral standard that holds a record of the unit’s proud history. Furthermore, it is tradition for units to be accompanied by anaethermatic bird known as a drillbill, in honour of the original one that was taken to battle by Grundstok himself.[1a]

Grundstok Thunderers are transported aboard an Arkanaut Frigate or Ironclad,and form an invaluable reserve that can be deployed quickly to wherever theyare needed. Kharadron military history is replete with stories of Thunderers arriving in the nick of time to solidify a battle line or drive back an encroaching enemy, standing alone at battle’s end surrounded by a circle of fallen foes.[1a]

A unit of Grundstok Thunderers has 5 or more warriors. Each Grundstok Thunderer is armed with an aethermatic weapon, whether the signature aethershot rifle, an aetheric fumigator, a decksweeper, an aethercannon or a Grundstok mortar. If any enemies survive their devastating fusillades, they resort to bashing in skulls with their gun butts. One or several Thunderers can become Honour Bearers and feature a keystone added to their suits’ power packs, which make the unit more courageous.[1b]

The leader of this unit is the Gunnery Sergeant. A Gunnery Sergeant wields a special double-barrelled aethershot rifle, and sometimes an aethermatic bird known as a Drillbill perches upon his shoulder. When the unit is threatened, the Drillbill whirrs to life, pecking at the enemy’s vulnerable spots.[1b] 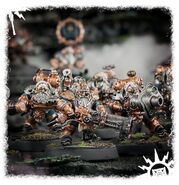