Hearthguard Berzerkers are the wrath of the Runefather

loosed upon his foes. The anointed of Grimnir, they take their molten sacrament from the forge-temple. Filled with fiery determination they charge headlong into battle, a bellowing war cry upon their lips and fyresteel axe in hand.[1]

Hearthguard Berzerkers are the elite warriors of the lodge, proven in battle beneath the fiery gaze of the Runefather. When the Fyreslayers sound their horns of war, it is the Hearthguard Berzerker fyrds who are first to heed their call, eager to unleash their fury against their enemies. This duty is entrusted to them by their lord, and they grip it as tightly as the two-handed fyresteel weapons they wield.[1a]

Each Hearthguard Berzerker is a stubborn and relentless warrior. Their thick skin shines with ur-gold runes as they fight, flames playing across their muscles and filling their eyes with heart-stopping rage. Against man-sized foes, Hearthguard Berzerkers favour the flamestrike poleaxe – a deadly weapon of ancient design that incorporates a heavy chain capped with a flanged brazier of roaring forge-fire. As the Hearthguard hews apart his foes with the axe blade, the brazier whips back and forth through the press of combat, breaking bones and setting flesh alight.[1a]

Against foes of more monstrous proportions, the Hearthguard Berzerkers unlimber their berzerker broadaxes. These massive blades are perfect for punching through the chest of a fully armoured Chaos Knights or hacking the limbs from a rampaging ogor. Despite the size and heft of these weapons, the Hearthguard wield them as if they were deadly extensions of their own bodies.[1a]

The Hearthguard Berzerkers are given the honour of protecting the Runefather and his sons in combat. Before battle, the karl leads his Hearthguard in swearing their oaths to the lodge anew before the visage of Grimnir. To these fearsome warriors, the protection of the Runefather is synonymous with the defence of their god. It is little wonder then, that when the lodge’s patriarch and his heirs are threatened by overwhelming odds, the Hearthguard gladly fight to the death to defend them.[1a] 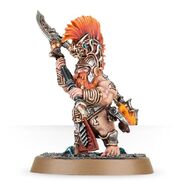 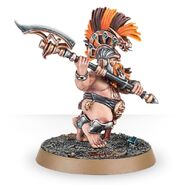 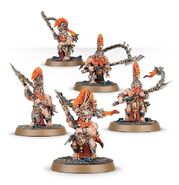 Retrieved from "https://ageofsigmar.fandom.com/wiki/Hearthguard_Berzerkers?oldid=6934"
Community content is available under CC-BY-SA unless otherwise noted.