Hexwraiths, also known as Reaper Knights, are malevolent Undead cavalry composed of Nighthaunt wraiths. They serve in the armies of the Grand Alliance of Death under the control of Nagash, the god of death.

The Hexwraiths ride straight through their foes, turning blood to ice and snatching souls from screaming warriors. Once mortal knights both proud and cruel, these ethereal killers relive their glory by visiting pain and death upon the living.

A single swipe from a Hexwrath's Spectral Scythe can cut the cord between a soul and its body, allowing it to be claimed by the wielder. The flickering flames that surround Hexwraiths are the smouldering remnants of the spirit-stuff these dread ghostly cavalrymen have stolen during their rampages.

In the past, Hexwraiths rose to haunt battlefields, riding down mortals in order to claim their souls. The spectral riders were often recruited as shock elements into Nagash's undead legions, but since the Shyish necroquake it is in the Nighthaunt processions where the Hexwraiths are most often encountered. Striking hard and fast, they gallop over rivers and through walls to pursue the enemy, their cruel laughter echoing across the battlefield as their terrified foes attempt to flee in vain.

Each Hexwraith is armed with a Spectral Scythe. They ride atop Skeletal Steeds that attack with their hooves and teeth. 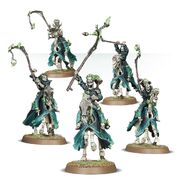 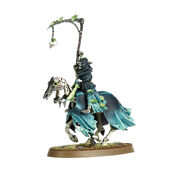 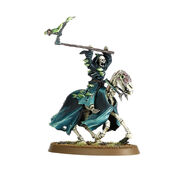