The Soulrenders are unusual amongst the Isharann, for they are trained in combat alongside the Akhelians, and well accustomed to acting at the forefront of battle. Upon each Soulrender's helm dangles a lurelight, its strange glow attracting and absorbing souls, both those of fallen allies and enemies. It is the Soulrenders who collect the bounty of an Idoneth raid, harvesting the spirits of their victims. At need, a Soulrender can use these souls to reinvigorate fallen Namarti, healing their wounds so that even those recently struck dead might rise again. Once back in their undersea strongholds the souls are transferred, with those of Idoneth enshrined into the chorrileums, and others made ready to be seeded within newborn Namarti.[1a]

Armed with a hooked polearm known as a talunhook, Soulrenders fight amongst the Namarti, replenishing their subordinates' ranks even as they reap spirit-stuff. A rope-catch attached to the talunhook is ideal for snaring foes that attempt to flee, making it easier for the wielder to capture their essence. To aid their hunting, each Soulrender employs a Rakerdart, a bond-beast that glides at its master's feet, ready to stab prey with its sharp bill to ensure none can escape.[1b] 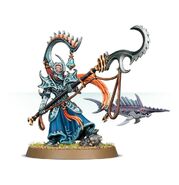 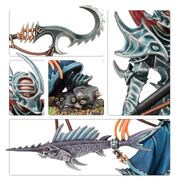 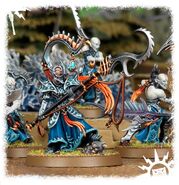