It is the Tidecasters who conjure the phantasmal sea that allows aelf and aquatic beast to move and breathe within the same space as if they were in their own natural environment. The powers of these Isharann are not solely concerned with manipulation of the elements, however. They are able to conjure spells from the repressed anguish of the Idoneth, the curse that echoes still from their ancestors' torture within Slaanesh. Such magics take the form of crushing waves of despair, black pits of hopelessness or raging maelstroms of horror that shatter the minds of the foe, leaving them wide open to attacks from the Namarti and Akhelians. So potent are these enchantments that some victims believe themselves to be trapped underwater, causing them to drown in their own fear and sorrow.[1a] 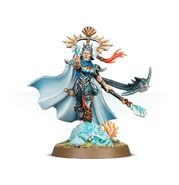 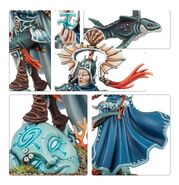 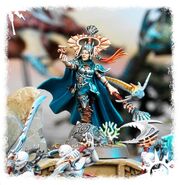