The Knight-Venator is a sky-archer, a winged hunter that glides over the battlefield raining death upon the foes of Sigmar. With a screeching Star-eagle flying by his side, this celestial knight can streak out of nowhere, quickly take aim, and bring down even the largest or most powerful of enemies.[1a]

Almost before a man can blink a Knight-Venator can nock and loose not one arrow, but an entire volley of shots. The hunter’s actions are a blur – only faintglowing contrails and the whirring hiss of arrows in flight give away that any shots have been fired at all. That is, of course, until the missiles find their mark. A Knight-Venator is not only incredibly quick when he strikes, but also deadly accurate. Armed with a realmhunter’s bow, he can put three arrows through a helmet’s visor from a great distance, before the target has time to lift hand or shield in defence.[1a]

A Knight-Venator is a Stormcast Eternal champion – a member of a Strike Chamber’s auxiliary command. Each Knight-Venator is a deadly asset, deployed to lead Prosecutor retinues, or given individual assignments to target specific enemy leaders or monsters. In the role of hunting assassin, these warriors are unmatched. They can speed into position and strike from afar, quickly firing off a series of deadly volleys to pincushion their target. Those rapid shots can pitch a Chaos Lord off his bestial mount or take the eye from a charging Cygor.[1a]

The arrows a Knight-Venator carries are magical in nature, as are the quivers they bear them in. Made by the Six Smiths, each quiver fills as quickly as the shots can be loosed. However, there is one missile of especial note – the Star-fated Arrow. Forged of comet-struck steel, this triple-blessed arrow is so powerful it takes many hours to rematerialise in the quiver. When shot it leaves behind a bright, iridescent trail and strikes like a clap of thunder. Against powerful targets, the Star-fated Arrow crashes into its target with extra potency, so that a single shot can topple a hulking Aleguzzler Gargant or fell a mighty Lord of Plagues.[1a]

During training exercises, Knights-Venator scour the celestial space – launching themselves from the Sigmarabulum that rings the Broken World. It is during these hunts that each Knight-Venator finds and bonds with the fierce raptors known as Star-eagles. These creatures hunt the Aetheric Clouds, their eyes able to see the ethereal and their claws able to rend such creatures, ripping them into reality as they tear their flesh apart.[1a]

A Knight-Venator is armed with a Realmhunter's Bow and is accompanied by a vicious Star-eagle that attacks with its Celestial Talons.[1b] 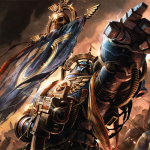 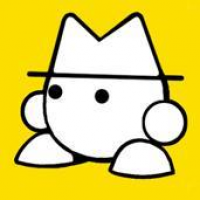 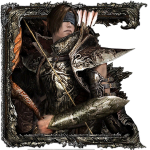