Born of tragedy and betrayal, Knights of Shrouds are spectral commanders blessed with unholy power by Nagash himself. They are the leaders of the Nighthaunt armies, the directing minds behind the processions of horrors that serve the Great Necromancer. Where these fell generals lead, terror soon follows.[1a]

In life, Knights of Shrouds were military commanders - great leaders of men that bartered their souls away to Nagash. In return, these spirits have been granted power and immortality, becoming generals in command of the Nighthaunt processions.[1a]

The making of a Knight of Shrouds does not occur at random, for Nagash does nothing on impulse. Since the Age of Myth the greatest champions of mankind were targeted, and whether they led unruly hordes or disciplined armies full of pomp and pageantry, undead hosts were thrown against them. Some of those warrior-exemplars died in combat, others rallied their troops in order to stave off disaster. However, time and numbers have always been on the side of the dead, for Nagash is immortal, and his armies legion.[1a]

Over time, no few of the opposing leaders were ground down. Only those that were willing to betray their own people and pledge an oath to Nagash were spared. These traitors were granted immortality, transformed into spectral generals. Many have been held long in hidden underworlds, yet only now has Nagash unleashed them to lead his Nighthaunt processions.[1a]

Even the most cold-hearted Knight of Shrouds suffers some degree of anguish over their betrayal, and in order to forget their past each plunges headlong into their duties and the blackness of undeath. Each tells themselves they had no choice, that anyone else would have done the same in their position, but a worm of doubt forever gnaws at what is left of their soul. They are cursed to forever carry their misdeeds, and also to bring death to the living.[1a]

Upon forfeiting their life to Nagash, a Knight of Shrouds is gifted a Sword of Stolen Hours - a cursed blade that steals the soul energy of those it slays, transferring a portion of that power back into its wielder. As they did before their spectral existence, some Knights of Shrouds ride to battle upon ethereal steeds, while others prefer to fight on foot. All are formidable bladesmen - fell-handed foes with many lifetimes' worth of battle experience.[1a]

It is not solely for their martial prowess that Knights of Shrouds are appointed as Nighthaunt commanders, however. These were leaders of soldiers, canny generals that understood the arts of war. Now, their chill, disembodied voices ring out over the battlefield, directing their forces and instilling them with a fierce vigour not seen in the unliving hosts of the Deathrattle and Deadwalkers. While the Nighthaunts automatically heed a Knight of Shrouds' orders, the living consider these dire figures to be the worst kind of traitors imaginable.[1a]

A Knight of Shrouds is armed with a Sword of Stolen Hours.[1b] He may ride a formidable Ethereal Steed to battle, which rends its prey with its Ghostly Hooves and Teeth.[1b] 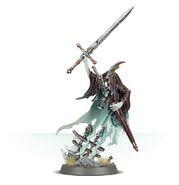 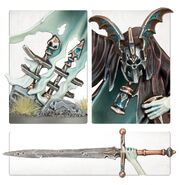 Retrieved from "https://ageofsigmar.fandom.com/wiki/Knight_of_Shrouds?oldid=10229"
Community content is available under CC-BY-SA unless otherwise noted.