Crackling with lightning and blazing with celestial energies, the banners of the Stormcast Eternals are carried proudly into battle by Knights-Vexillor. Members of a chamber’s auxiliary command, these brave individuals have won the right to bear such an honoured icon of the Stormhosts.[1a]

It had been many centuries since the powers of Chaos were truly challenged. Yet they – the gods themselves, their immortal daemons and the most powerful of their mortal minions – had not forgotten the foremost of their foes: Sigmar, the God-King. As the Stormcast Eternals strode forth out of thunder strikes, once more the hated symbols of their age-old enemy were brandished before them.[1a]

The banners proclaimed this new force to be an army of Sigmar, for they bore the once-familiar twin-tailed comet and hammer motifs. Yet these were not like the mundane standards of old, for they gleamed with barely contained celestial power. And the armoured figures that held the banners aloft were not mere men, but something far greater in stature. So were the Knights-Vexillor the heralds of Sigmar’s Storm.[1a]

Knights-Vexillor, the champions who bear aloft the banners of the Stormhost, lead gloriously from the front. Beneath their standards can be found the Stormhost’s finest, whether massed in attack formation or deployed in a defensive shield wall. Calling upon the power of his standard, a Knight-Vexillor can send forth hurricane-like tempest blasts or call down blazing stars to smite the foes.[1a]

Unlike nearly all positions within a Stormhost, the rank of Knight-Vexillor is not predetermined by Sigmar and the Reforging process. The honour of being promoted to Knight-Vexillor and carrying forth an empowered banner is earned in the Gladitorium. Entire chambers of Stormcast Eternals are pitted against each other. Although it is but mock combat, the competition is fierce, and the clash brutal. When at last a single warrior triumphs and claims the banner, he is struck by a bolt from Sigmar himself, a final charge of divine energy that courses into him and the banner alike.[1a]

Some Knights-Vexillor carry a Meteoric Standard, while others carry a Pennant of the Stormbringer.[1b] 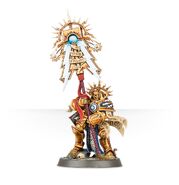