" Caution, my lord. No dull creatures are these Seraphon, but the light of the stars themselves come to burn away our blessed darkness." 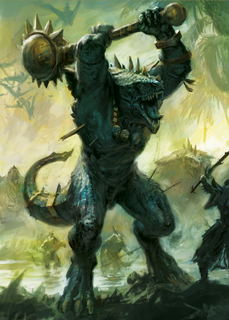 Huge in stature, the Kroxigor send enemies flying with each swing of their massive weapons. Summoned by the Slann to crush stubborn enemy resistance, these lumbering giants possess strength enough to smash enemy fortifications to rubble and break the backs of terrifying monsters.[1a]

Easily twice the height of a Saurus, Kroxigor are ill-tempered mountains of raw strength. Man-sized foes are reduced to mangled sacks of shattered bone by their massive clubs, and even Gargants or looming Chaos beasts can be brought down with a well-placed organ-rupturing blow. Even mighty strongholds are vulnerable to the Kroxigor’s unstoppable assault, their walls and foundations crumbling under the pounding blows of the gigantic seraphon.[1a]

In their role as line-breakers, Kroxigor have proven their worth innumerable times, wading into the heart of the foe and scattering them like terrified prey animals. Often the slann will call forth Kroxigor cohorts to clear a path for the rest of their army, the huge warriors paving a road of broken bodies from one end of the battlefield to the other.[1a]

The longest-lived of the Kroxigor are calloused brutes, their thick-scaled backs growing heavy with bony spikes and ridges. These so-called Ancients often carry weapons imbued with solar energy – great clubs and hammers whose heads are infused with shifting motes of light, each one the reflection of a star in high Azyr. In battle, it is often the kroxigor Ancients that guide their kin, alphas who lead by ploughing head-first into combat and shrugging off blows that would lay low an Ogor.[1a]

Even Oldbloods and Scar-Veterans instinctively respect the strength of the Kroxigor, treating them as honored warriors rather than simple beasts of burden to be goaded into battle. The Saurus recognize the warrior-spirits that dwell within the hulking forms of the Kroxigor, and the deep hatred of Chaos that surrounds them like an aura of barely contained violence.[1a]

A unit of Kroxigor is armed with mighty Drakebite Mauls. One in every three Kroxigors may instead be armed with a Moon Hammer. Even unarmed, Kroxigor are feared for the terrifying bite of their Vice-like Jaws.[1b] 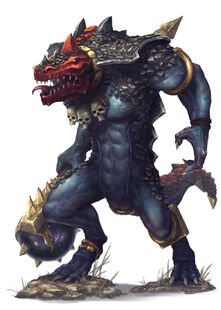 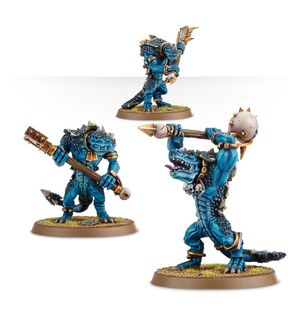