Kurdoss Valentian on his throne accompanied by two Wraith Heralds

Alive
The dire presence of Kurdoss Valentian is announced by dirgeful trumpets and grim proclamations of his basest deeds. The Craven King sits silent and motionless upon his drifting throne until he closes with the enemy, and then he wields the Sepulchral Sceptre to deadly effect, mercilessly slaying all whom his queen bids.[1a]

Nagash needed an appropriate lieutenant to serve his newly crowned Mortarch of Grief. Kurdoss Valentian proved an especially fitting choice - the king provided Lady Olynder with a fearsome bodyguard and a tactically minded advisor, and their cold betrothal was cruelly pleasing to Nagash.[1a]

In life Kurdoss had a ruthless desire to rule, and many were his wicked deeds to claim power, including the assassination of allies, the betrayal of entire armies and the murder of his own brothers. Just as Kurdoss took up the fallen crown of his last sibling, Nagash claimed his soul. Unlike his brothers, Kurdoss did not worship Nagash, but instead had chosen the God-King Sigmar as his patron - reason enough to draw the Great Necromancer's ire.[1a]

Even as a wraith in the spirit world Kurdoss' relentless ambition saw him rise. Nagash was impressed with the Craven King's resourcefulness and fighting skill, yet it was not his desire to see Kurdoss claim rule over an underworld nation. The Great Necromancer whisked Kurdoss away from the afterlife kingdom he was usurping for his own, instead granting him a touch from Alakanash, the Staff of Power. In doing so, Nagash bestowed upon Kurdoss great might, yet also an accompanying curse.[1a]

Nagash ensured that Kurdoss' ultimate dream of rule was realised in name only, for he was betrothed to Lady Olynder, fated to always follow her lead. Indeed, Kurdoss became little more than a strongman - a bitter jest to be so close to all he desired, yet still so far away.[1a]

Kurdoss bears several symbols of his new office, including the throne he aspired to sit in life. He also carries the Sepulchral Sceptre - a weapon that in Kurdoss' hands can split rock or crack open a gargant's skull.[1a]

Kurdoss utters not a word as he hovers upon his throne. Only when he wishes to smite the foe does he deign to move from his despondent posture. The same cannot be said for his spectral attendants. These are the spirits of two who Kurdoss betrayed and supplanted as part of his bloody path to commandeer rule. Now the heralds are fated to serve him eternally and announce his many triumphs. However, they take cruel glee in declaring his defamatory titles - the Usurper, False Lord and Craven King - and interjecting with boasts of the many ignoble deeds that marked his quest for power.[1a]

Once forceful and commanding, Kurdoss Valentian's curse prevents him from speaking in anything more than a whisper - gone are his days of booming orders and taking charge. When prudent, he issues tactical advice garnered from his many victories upon the field of battle, but when he attempts to say more, nothing but the dust of ages issues from his mouth. An aura of bitterness exudes from Kurdoss so powerful that it can choke enemy captains and generals even as they seek to issue their own orders, the words foundering and dying upon their trembling lips.[1a]

Kurdoss Valentian is armed with the Sepulchral Sceptre. He is accompanied by two Wraith Heralds, who are armed with Spectral Claws.[1b][2] 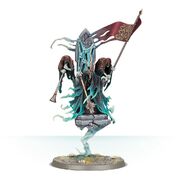 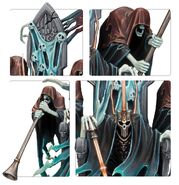 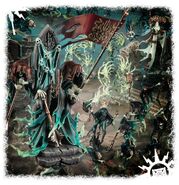