The elite of the sylvaneth Wargroves, the Kurnoth Hunters are

Free Spirits who fight upon the orders of the Everqueen herself. Strong, swift and incredibly skilled, these warrior spirits embody the power of the hunter god Kurnoth in every blade-swing and bow-shot, picking off their enemies with frightening efficiency.[2][3]

One of the few deities worshipped by the sylvaneth alongside Alarielle, Kurnoth represents nature’s wildness and hunger. The Kurnoth Hunters are living embodiments of his wrath. Nearly twice the size of a Dryad, masters of sword, bow and scythe, they are strong enough to tear a Chaos warrior in two and tough enough to shrug off the hardest blows. Agile, graceful and stoic, they display little of the whimsy of some of their kin - they display absolute purpose, calm as ancient oaks, deeply focussed on their battles.[1]

Travelling in small bands, the Kurnoth Hunters range ahead of Alarielle’s Wargroves. Some sorcery of their mother goddess lends speed and subtlety to their movements, allowing them to pass undetected through all but the most heavily guarded terrain. Then, they watch the enemy’s movements with infinite patience before choosing the perfect moment to strike.[3a]

When they fight, the Kurnoth Hunters show none of the capricious whimsy of some of their kin. They always have a purpose, a mission, and a carefully considered method. Calm as an ancient oak, certain as the seasons turn, the Kurnoth Hunters lure their victims into traps and strike swiftly from ambushes.[3a]

The Kurnoth Hunters are not only exceptional scouts, but also serve as the Everqueen’s executioners. Should an enemy war leader be deemed too dangerous to live, or some perpetrator of great misery against the sylvaneth befound, the Kurnoth Hunters have their queen’s dispensation to call the Wild Hunt. At such times, all sylvaneth are compelled to lend their strength to the Hunters’ quest and will not rest until their prey has been cornered and slain.[3a]

Though taciturn and strange, even by sylvaneth standards, the Kurnoth Hunters are deeply focussed beings through whom the spirit-song reverberates in full force. They venerate their living goddess and devote themselves utterly to her will. They also give praise to their soul father, the Hunter God Kurnoth, and dedicate those slain in battle as sacrifices upon his altar. Across the Mortal Realms, many sylvaneth observe rites to minor deities and demigods of cycles and seasons, but their overt worship of another deity leads some to mistrust the Kurnoth Hunters. Alarielle vouches for her most warlike sons, and this is enough for most, but there are still those who watch the newcomers warily, despite all their great victories against the forces of Chaos.[3b]

Kurnoth Hunters go to war in units of at least three warriors, led by a Huntmaster. Some units wield Kurnoth Greatswords, while others bear wicked Kurnoth Scythes. Others attack at range, loosing arrows from Kurnoth Greatbows while their Quiverling companions attack nearby enemies with their vicious claws. They can also protect themselves by sprouting a thick weave of thorned branches.[2][3c] 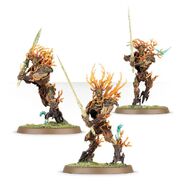 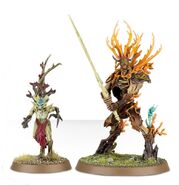 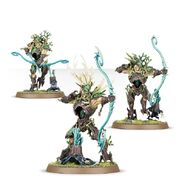 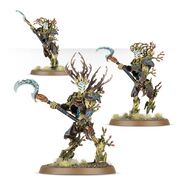