" Do not resist – death is inevitable. The more quickly you succumb, the sooner your suffering will be over. Come to me, and be mine for evermore…"

" Do not cease the attack until every living soul has been sent to join us in the underworlds!"

Lady Olynder is despair given form. She exudes hopelessness and casts an enfeebling gloom upon her foes. Accompanied by banshee handmaidens, the Mortarch of Grief bears the life-taking Staff of Midnight and horrors unknown beneath her veil.[1d]

She is the Mourning Bride, the Unrequited Queen, the Veiled Lady and the Mortarch of Grief. She is despair made manifest, gloom given form. She is Lady Olynder, and in her are bound all the sorrows and anguishes of the realms.[1c]

Each of Nagash’s Mortarchs has been anointed with a portion of the Great Necromancer’s vast power. To Lady Olynder, who feigned sorrow in life, he gifted a mantle of misery – she now felt all the woes of the Mortal Realms, becoming a weaponisation of grief itself. Her power transcends the melancholic, for she exudes mind-crippling waves of purest desolation. Mortals in her presence are overwhelmed by a gloom so heavy that only the strongest willed can remain upright. Most fall to their knees, mentally battered by their own utter hopelessness. It is a sorrow and regret potent enough to cause a mother to forsake her child, a warrior to lay down his sword and accept the inevitable, to stop a beating heart.[1c]

Lady Olynder hovers above the ground, attended by her bridesmaids, a pair of Banshee Handmaidens. As she advances, the thorny vines of grave-roses instantaneously sprout before her, their flowers rapidly blooming and dying in order to lay a path of fallen petals beneath her floating form. In her hands the Veiled Lady wields the Staff of Midnight, an ornate stave topped with a polished gemstone of vitrified grave-sand. The lightest touch of this staff is enough to wither a mighty oak, or kill a grown man outright. Yet it is not Lady Olynder’s deadliest weapon.[1c]

In addition to being surrounded by an aura of absolute misery, Lady Olynder is also a powerful sorceress. With her incantations, she can direct a pall of despair to weigh upon her foes, slowing them like some unholy lodestone. Those afflicted suffer a mental burden so dire it causes even the bravest to tremble, their martial prowess lessened by leaden limbs and despondency beyond any hope of redemption.[1c]

In the midst of this bleak atmosphere she has created, Olynder presses forward, her banshee bridesmaids shrieking a wail of the damned while slashing with spectral talons at foes who draw close. One bridesmaid bears an ensorcelled grave-sand hourglass – a gift from Nagash – that can be smashed asunder with lethal effect. Yet Lady Olynder has another, even deadlier weapon. From behind her thin shroud, the sunken eyes of the Mortarch of Grief fixate upon a foe. Deliberately she pivots to face them, before slowly and solemnly lifting her veil. What horrors they see are unknown, for none have yet lived to tell the tale. So does Lady Olynder conquer, leading the fore of Nagash’s invasion in order to bring a new age of eternal death over the Mortal Realms.[1c]

The Mortarchs are Nagash’s top lieutenants – powerful undead leaders that have been granted a sliver of the Great Necromancer’s power. Each of the existing Mortarchs, of which there were three, was chosen for their unique skills. Should Nagash need corruption he would turn to Neferata, Mortarch of Blood. If he needed to make a gory example of the foe, then he would call upon Mannfred von Carstein, Mortarch of Night. For the most secretive missions and empire-building, he favoured Arkhan the Black, Mortarch of Sacrament. All commanded their own undead legions and all wished to wield still more power. Yet Nagash desired a new element, and also loyalty, for of the Mortarchs only Arkhan the Black was truly content to serve.[1a][1b]

The tale of how Nagash scoured the underworlds for a new subordinate is a long one, for there are untold dominions of the dead. From Stygxx, the Land of Forgotten Gods, to the hidden cold-fire plains of Helstrom; from the relic-filled lands of Carstinia to Hallost, Land of Dead Heroes, no afterlife was left unsearched. Nagash fixed his baleful gaze upon many souls – champions of unconquerable tribes, tyrant-kings of long-forsaken empires, matriarchs of bloodthirsty sisterhoods. Yet Nagash sought some quality they did not possess.[1b]

It was not clever manipulation, base cunning, or well-planned military strategy that earned the armies of the dead so many triumphs during the necroquake – it was shock and terror. The most overwhelming victories had been won through the suddenness of their assaults and the wave of fear that spread before the invasions and hung heavily over all lands through which the spectral hosts passed. Nagash was impressed with the psychological effect of the Nighthaunt armies upon the fragile and superstitious minds of mortals.[1b]

In truth, Nagash had forgotten the notion of fear, for it had been ages since he had felt its tremble. Despite his supreme intellect, the Great Necromancer, in his long plans, had allowed his logical mind to strategise without factoring in the emotions of mortals. It was a rare mistake, and one he vowed not to repeat.[1b]

In all his travels across the underworlds, Nagash found none like the Veiled Lady. Here was a spectre he had punished many centuries ago with a unique curse. In life she had been Lady Olynder, a beauty famed throughout the empire of Dolorum – the largest of civilisations from the lands known since the Age of Chaos as the Screaming Wastes. She had schemed, plotted and used charm to climb socially, leaving behind a trail of ruined suitors and deaths under mysterious circumstances. So great was her appeal that she wound her way upwards, winning the hearts of nobles and then, eventually, the Dolorum prince himself. Her betrothal to the future king ended on the very night when the prince and his father, the high king, disappeared. In their absence, she became the ruler of Dolorum.[1b]

Vowing to mourn her missing prince and king, the young queen took to wearing a veil. Her people called her the Mourning Bride or the Unrequited Queen, and her public display of grief won over even the coldest of hearts. Yet it was all a lie – her shows of remorse were false, her sorrows no more than a ruse. Hidden behind her veil and deceitful sobs, she could not help but smile at her own cleverness.[1b]

Elsewhere in the realms the travails of the Age of Chaos had begun turning civilisations into ruin, although Dolorum had thus far been spared. That came to an end when the plague arrived. Soon the queen’s sorrows were for her realm, but again, all her tears were false. She was safe in her palace, and her life a dream, even as all those around her died in the agonised throes of a weeping pox.[1b]

Through it all Nagash had watched the empire of Dolorum, for its people had always honoured him. Their dedications had ended with the crowning of the new queen. Even when her lands, cities and throne room were all but empty of life, Lady Olynder felt no real grief, and she attempted to parley with the agents of Nurgle. It was then that Nagash claimed her soul as his own. So did Olynder become the Veiled Lady, a spectre burdened to feel all the miseries of the Mortal Realms and forced to haunt the ruins of Dolorum. After the passing of many centuries, during which Nagash gave not a single thought to her fate, the god was surprised at what he found when he discovered her once more.[1b]

The Veiled Lady had again risen to rule over old Dolorum, although it had become a land swarming with wraiths and spectres. During the upheavals of the necroquake, Olynder subjugated the phantasmal denizens that arose there, drawing them closer with her spreading aura of grief. So haunted were the lands that any living being that dared enter them experienced true terror. Yet rule of one underworld could not satisfy her ambition, and the Veiled Lady longed to bring more nations – living and dead alike – beneath her dominion.[1b]

Here, at last, was the leader that Nagash was looking for, and so in dark ritual the Great Necromancer granted Lady Olynder a sliver of his own divinity. He knighted her the Mortarch of Grief, and tasked his new lieutenant first with uniting the Nighthaunts, and then leading them as the vanguard of his new crusade.[1b]

Lady Olynder is armed with the Staff of Midnight. She is accompanied by two Banshee Handmaidens, who are armed with Spectral Claws.[1d][2] 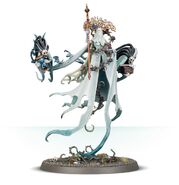 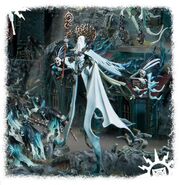 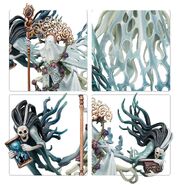