Masters of aetheric lightning who can manipulate the cerulean energy of Azyr, the leaders of the Sacrosanct Chambers are known as Lord-Arcanums. Their storm-sight allows them to see the souls of living creatures, and they can hurl destructive bolts and empower the warriors around them with but a whispered phrase of power.[1a]

Those given the rank of Lord-Arcanum by Sigmar earned it by wielding eldritch energies in the name of freedom. These brave magic-users risked body and soul as mortals to defy the Dark Gods, and upon their reforging find themselves in command of even greater powers.[1a]

With the potency of Azyr coursing through him, a Lord-Arcanumcan summon lightning as easily as another man draws breath. In battle, he reaches up into the skies, a corona of corposant playing around his staff, before pulling down devastating energies fromabove. Much like those that bear the Stormcasts to the realms, these strikes thunder to earth – but instead of bringing the hosts of Azyr, they bring only destruction, immolating their targets in ground-shaking blasts. It is thought amongst the Sacrosanct Chambers’ ranks that the devastating sky strikes summoned by each Lord-Arcanum are manifestations of the Prime Electrids, offshoots of the Great Bolts – those columns of lightning so fierce that Sigmar has used them to level castles and slay godbeasts alike. So strong is the Lord-Arcanums’ command of storm energies that, on the field of battle, they can capture the souls of slain Stormcast Eternals before they vanish into the Heavens, restoring them to their bodies so that they can fight once more.[1a]

The magical abilities displayed by those of the Sacrosanct Chambers are as impressive to the creatures of the Celestial Realm as they are to the Stormcasts’ mortal allies. Hence it is common for Lord-Arcanums to ride fierce celestial beasts to war – and the combined might of mount and master is potent indeed.[1a]

The wind-swift beasts known as Gryph-chargers are especially drawn to those who wield the lightning of Azyr. Though it takes time to win the loyalty of one of these creatures, when a Gryph-charger joins forces with a Lord-Arcanum the resultant bond is strong indeed; united in their hatred of the foe, they fight as one. Thus joined, both Gryph-charger and rider can surf the aetheric winds, hurtling forth as swift as a stormbolt to re-materialise with talons just inches from the prey. Should a rogue soul escape from the Anvil of the Apotheosis and get loose in the city-like sprawl of the Sigmarabulum, a Lord-Arcanum will typically take to the saddle of his Gryph-charger and hunt it down before it can wreak too much havoc. The Lord-Arcanums that ride Gryph-beasts have also harnessed the regenerative power of Sigmar’s storm; on the battlefield, chains of lightning cascade through his nearby comrades, invigorating them with the power of the storm and restoring injured comrades to strength.[1a]

A Lord-Arcanum that rides a Celestial Dracoline to war is typically a bombastic and bellicose type. It is just as well, for the Dracoline, a beast that respects only strength of will, would soon desert a rider that could not win its favour– or worse still, casually disembowel him in a blur of claws. Dracolines are leonine beasts that hunt the bone-armoured pachyderms of the Azyrite mountain ranges. They sharpen their claws on stone rich in celestium, for not only does that ensure they are razor-sharp, it charges them with electric force that is dispersed in a great blast of energy whenever they pounce on their prey. A Lord-Arcanum that can harness one of these beasts as a steed can use celestial magic to infuse fellow Dracoline riders, making the creature’s lethal leap all the more destructive.[1a]

There are some Lord-Arcanums whose mastery of the heavenly realmsphere is such they can astrally project themselves into the aether, that non-space that lies between the realms. Such travellers of the astral pathways can sometimes form a bond with a winged Tauralon. Capricious by nature, the Tauralon is a beast native to the aether that preys upon the magic-eating voidshoals of that strange place. Since the building of the Sigmarabulum, whole flocks of Tauralons have taken to using that great crescent as their eyrie. They chase passing meteorites and shooting stars for sport, vying amongst themselves to see who can head-butt the blazing stellar debris onto a more entertaining course – for instance, towards an astrally projecting soul. Should a Lord-Arcanum escape this lethal game with their spirit intact, they can join in by sending the meteors right back again – and thus win the respect of these beasts.[1a]

The friendship between arcane warrior and celestial creature grows into a lasting partnership when rider and beast join their forces in war. The Tauralon is nimble as a hawk, despite its great size. Though it can deliver a meteoric ram from its curling horns that hits hard enough to shatter a castle wall, it prefers to avoid direct conflict, instead winging over its intended prey with a trail of astral light glittering behind it. Where this light illuminates the enemy, settling like stardust to glimmer upon them, it does no discernable harm. Only when the foe see the arrows of Judicators and the eldritch bolts of Sacrosanct adepts veering straight towards them – no matter their original course – do they realise that the Tauralon rider that passed them by was in truth the harbinger of their doom.[1a]

Some Lord-Arcanums prefer not to divide their focus between their beloved storm-magic and the taming of a beast, no matter how intelligent the creature. Such individuals choose to go to war unmounted in order to better concentrate on their art, and they are subsequently especially adept at the manipulation of magic. If needed, they will inspire their brethren with stirring speeches, but typically when they raise their voice, it is not to guide and command the warriors around them, for the warrior-mages of the Sacrosanct Chamber know well what their masters expect of them. Instead, the Lord-Arcanums callout mystical phrases to shape and control the magic they harness in the name of the God-King. Of all the Lord-Arcanums, it is those who fight on foot that are most likely to make use of the endless magic that has spilled across the realms since the time of the necroquake, summoning the storm-borne discs known as Dais Arcanums to bear them to war when speed is of the essence – and then, when their adversaries are close, conjuring howling maelstroms and comets from the sky to devastate the enemy.[1a]

A Lord-Arcanum is armed with an Aetherstave.[1d][4] He may rides a wind-swift Gryph-charger to battle, which fights with its Razor Beak and Claws.[1f][5] Also he can rides a Tauralon to battle, which attacks with its Horns and Stamping Hooves.[1e][8] If he rides a Celestial Dracoline to battle, its which rends its prey with its Monstrous Claws.[1c][7] 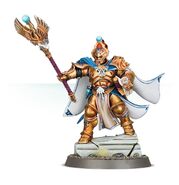 Lord-Arcanum miniature armed with an Aetherstave.
Add a photo to this gallery

Retrieved from "https://ageofsigmar.fandom.com/wiki/Lord-Arcanum?oldid=9374"
Community content is available under CC-BY-SA unless otherwise noted.